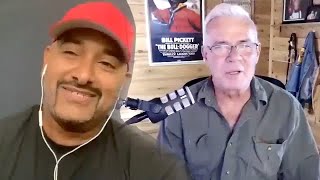 Former WWE personality Jonathan Coachman was a special guest on Ad Free Shows to discuss his wrestling career. Subscribers in the “Top Guy” tier had the chance to grill Coachman on the entirety of his career in both wrestling and broadcasting.

Coach worked for WWE from 1999 through 2008, before returning to WWE in 2016 for a period of time on commentary and eventually on the pre-show panel. This second stint with the company led to some bitterness with company. Coach is very clear about leaving this part of his career in the rear view while focusing on his goals with CBS. He also called out Vince McMahon

“I have a very bad taste in my mouth from the sport of wrestling right now,” Coach said. “Ultimately a year ago when they asked me specifically to come back and do the XFL, from January to March I flew coast to coast. They didn’t have the expenses set up because it was a different company. I paid my own expenses, between eight and twenty thousand dollars. I was supposed to be reimbursed later. They bounced a big check to me and to this day have not paid me. I reached out and the week after XFL bounced that big check, they cut my contract on the WWE side.

Coachman detailed his future plans and any potential for a relationship with WWE. His current position with CBS, PGA and EA Sports is something that he plans to continue through the end of his career. As for a potential WWE Hall of Fame induction, Coachman said it is not something he would accept due to his treatment by the company.

“I would not accept [a WWE Hall of Fame induction]. Sometimes in life you’ve got to do what’s right at that moment,” Coach said. “People are facing a pandemic. I’m one of the lucky ones. So many were laid off, even worse furloughed, and you’ve got billions in the bank. What I would do, if two people are making $100 grand a year, ask them both if they’d rather make $50 grand while we get through this. What do you think both people would have done? But that’s not what they did. You can’t treat people that way. I wouldn’t want to hear anything they’d have to say at this point. Do I think I’m worthy? There’s no question.

“I wouldn’t want the award from people that, after 20 years, could do that. In 2015 when TV contracts were coming up, I got a 3am call from Vince’s right hand man. ‘Coach, you’ve got to get our content on ESPN’. I fought, I was starting to make enemies with executives at ESPN because I was loyal. We had to do it on our own time. Goldberg and Brock Lesnar? We started that feud on SportsCenter and our bosses didn’t even know! Ninety percent about how I was treated and how they treated others. I don’t know why you’d want your legacy to be that, and that’s what it is right now.

“I’m going to be at CBS for the rest of my career. It’s not just the bitterness. I’m so happy in what I’m doing now. I’m in a position to build something, something great with great people. I want to be an executive at CBS someday.”

If you use any of the quotes in this article, please credit AdFreeShows with a h/t to Wrestling Inc. for the transcription.