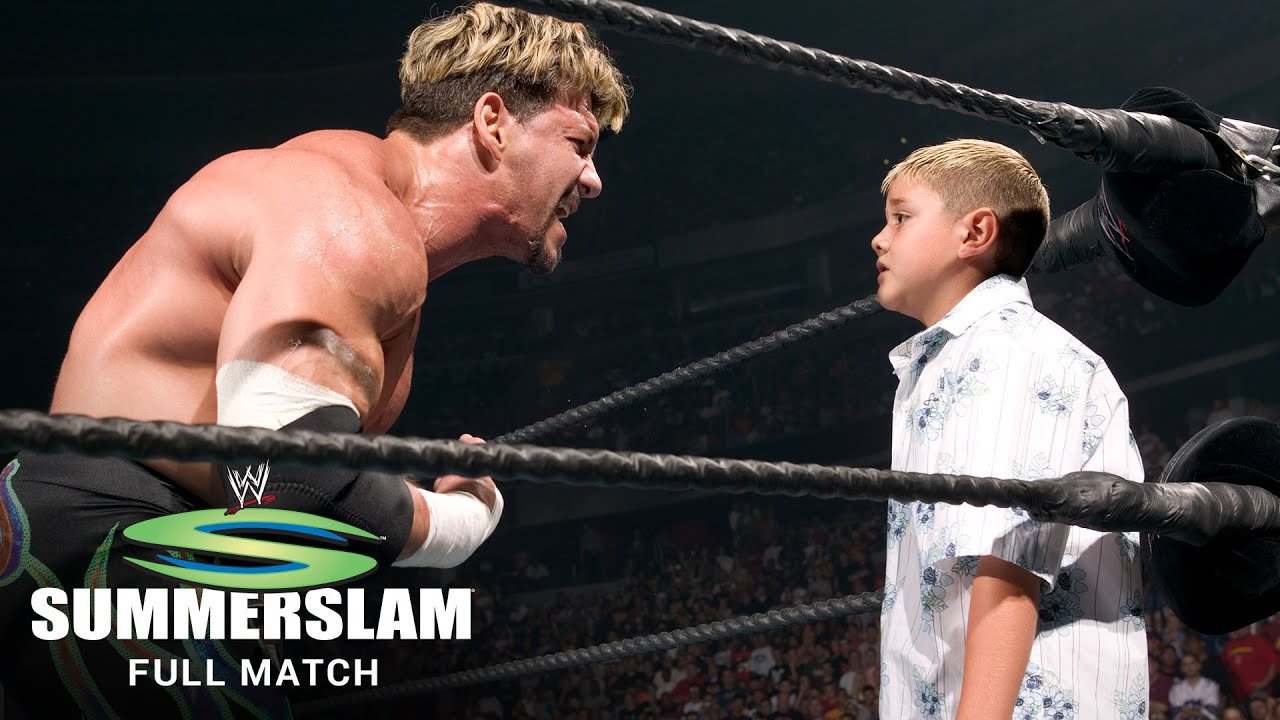 In 2005, an eight-year-old Dominik Mysterio was seen on WWE television for the first time as a part of an angle between his father, Rey Mysterio, and Eddie Guerrero, who was Dominik’s biological father in storyline. The feud between the two long-time friends revolved around the custody of Dominik which led to a ladder match at SummerSlam 2005. Rey beat Eddie with the help of his wife Vickie to, in storyline, keep the custody of his child.

On the latest episode of the Out of Character Podcast with Ryan Satin, Dominik Mysterio joined the podcast and spoke about his current run with WWE and looked back on his experience being involved in a wrestling story at eight-years-old. Dominik talked about his favorite memories from being involved in his father and Eddie’s feud and even mentioned how confused his fellow classmates and teachers were on who was his biological father.

“It was crazy being a kid and being on TV,” Dominik said. “I think the most exciting part about all of that was being away from school. I was in the third grade and the last thing I wanted to do was be in school. I was getting to travel with dad and ride tricycles all around the arena so why would I want to be in school? I would come back to school and all the teachers would be curious on what my home life was like because they didn’t know if my dad was my dad or Eddie was my dad or if there was this actual custody battle for me.

“Some of the teachers had to pull my mom aside or my dad aside when they’d come pick me up and ask them what’s the deal because they didn’t think it was healthy. Overall I think the kids were curious too like who my dad was but I had to tell them I’m pretty sure my dad is Rey Mysterio. They even had me hooked at one point like what’s going on here.”

Dominik also talked about the SummerSlam match between Eddie and his father where the winner would get custody of Dom. The 24-year-old spoke how he started to believe in the storyline to such a point that he thought if his dad lost, he would be going home with Eddie Guerrero.

“I don’t think I thought about it but I thought I would eventually go home with Eddie if he won,” Dominik said. “I genuinely thought I’d probably end up going home with him because I remember them telling me they wanted to do this storyline and my dad pitched it to me and I was all on board with it but I remember asking after like what’s going to happen afterwards. I remember thinking as a kid like what if my dad doesn’t win and I have to go home with Eddie? I never actually asked that but I thought about it. Personally, I would sit there and think about it.”

Rey won the match with the help of Eddie’s wife, Vickie, and ended the storyline. Dominik spoke about how close his family and the Guerrero family were at the time and revealed a gift Eddie bought for him after the storyline was over.

“That whole time we were always close with him and his family,” Dominik mentioned. “I remember he would always give me candy and at the time the PSPs came out and after the angle finished and everything he asked me what I was into and liked playing and the next week he had brought me this PSP game Fifa. He didn’t have to do that for me but it was just how much he cared. It was always a special relationship between him and my dad and I could tell after that there was a special bond between us as well.

“That gives me goosebumps,” Dominik stated, referring to how cool it was to be involved in his father and Eddie Guerrero’s storyline. “Knowing that I was a part of that and I got to work with him, that’s such a blessing man. He’s one of, if not the best to ever do it and I got to work with him as a kid. That’s so special and that’s something that now as a wrestler it’s something that I have a passion for. He means so much more now, and those moments that we had with him in the ring, I’ll cherish those forever because he’s one of the best and I would’ve loved to pick his brain or be in the ring with him today. The fact that I even had a chance to be in the ring with him back then as a kid is a blessing and I’m very thankful.”

If you use any of the quotes in this article, please credit Out of Character with Ryan Satin with a h/t to Wrestling Inc. for the transcription.