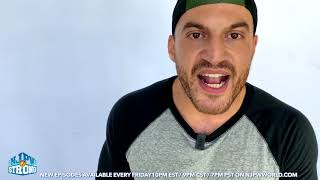 NJPW announced that Chris Dickinson will be missing Monday’s NJPW Strong: Detonation tapings in Riverside, California due to an injury.

Dickinson sustained the injury during his match at Battle in the Valley on Saturday, November 13.

He was scheduled to team with Alex Zayne to go against Jay White and Hikuleo. Yuya Uemura will now take his place and team with Zayne.

Below is NJPW’s full statement as well as the updated card for Detonation:

As he undergoes evaluation and treatment, he will be unable to compete on Monday November 15’s NJPW STRONG tapings in Riverside California.

We apologise to fans who were looking forward to seeing Chris wrestle, and appreciate your understanding. The following card change has been made to Monday’s event.

We invite fans to join New Japan Pro-Wrestling in wishing Chris the very best in his recovery.

Chris Dickinson sustains injury; will be unable to compete November 15 in Riverside.

Previous
Caprice Coleman On Ring Of Honor Hiatus: “Don’t Write Us Off!”
Next
Charlotte Flair Comments On Her Relationship With The Other Four Horsewomen Of WWE