The group of 14 WWE hopefuls reported to the Performance Center this past Monday to begin their training with the company.

Below are full details on this class of recruits. You can see group photos above & below.

The newest class of recruits reported to the WWE Performance Center in Orlando, Fla., this past Monday to begin their journey to WWE Superstardom.

The 14 hopefuls include a variety of up-and-comers who have already made names for themselves on the independent scene, one second-generation Superstar, and several standouts from football, gymnastics and rugby.

Theresa Schuessler who debuted on NXT 2.0 as Fallon Henley, is a 24-year old Tampa, Fla., native with five years of experience under her belt competing in the independent circuit under the name of Tesha Price.

Kayla Inlay has already begun to make a name for herself on NXT 2.0 and NXT Level Up. A former collegiate dancer and cheerleader, Inlay was trained by former WWE Superstar Tyler Breeze after training at his school “Flatbacks.”

A 6-for-2, 305-pound force, Joseph Sculthorpe was an NCAA All-Conference Offensive Lineman at NC State before signing with the Atlanta Falcons as an undrafted free agent. Originally from Hampstead, N.C., Sculthorpe was a high school state heavyweight wrestling champion.

18-year-old Maddie Knisley is a six-time state champion in vault, having trained in competitive gymnastics for 11 years. She also competed on the independent wrestling scene as Nikita Knight

Mitchell Lavalley has made a name for himself on the independent circuit under the moniker “Motherlover” Jake Tucker. Trained by the likes of WWE Hall of Famer Kane, Natalya, Tyson Kidd, and Dr. Tom Prichard, Lavalley won the 2014 “WWE Show Us Your Superstar” Contest when he was 19, making a series of videos at the WWE Performance Center before appearing on the SummerSlam Pre-Show Panel.

Bianca Carelli, the daughter of WWE Superstar Santino Marella, comes to the Performance Center after earning her Bachelor’s degree in biology from Western University. Carelli has extensive training in MMA fighting with a focus on Judo, Jiu Jitsu and Boxing.

Cole McKinney from Charleston, W.Va., has been honing his craft for over a year and a half already after foregoing wrestling offers from multiple DI Universities to pursue his passion for professional wrestling, going by the ring name Cole Karter on the independents.

Twenty-three-year-old David Bostian of Wilmington, N.C., has been a folkstyle wrestler for 16 years while simultaneously training as a powerlifter.

6-foot-4 Gabe Wai heads to Florida from Corvallis.Ore., following his tenure as a DI Rugby player at Lindenwood University. The 260-pound Army Reservist was projected to be drafted into the Professional Rugby League.

Carla Gonzalez from Pasadena, Texas is better known as Rok-C after graduating from Booker T’s Reality of Wrestling school as the youngest ROW Diamonds Champion.

Nnamdi Oguayo of Beltsville, Md., stands at 6-foot-3 and weighs 245 pounds after playing four years on the defensive line for Washington State University.

Edwin Grande was a standout offensive lineman at the University of Idaho and Monterey Peninsula College. The Oakland, Calif., native played for the Houston Blues football team during the 2020 Spring League.

Amelia Herr is an 18-year-old Criminal Justice major out of West Chester, Pa. With two years of Taekwondo training under her belt, she also competed on the independents as The Notorious Mimi

For more information on the WWE’s talent recruitment, including how to apply for a tryout, visit Recruit.WWE.com. 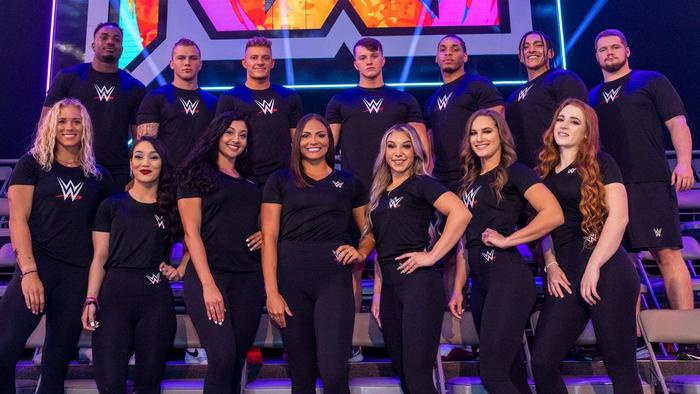