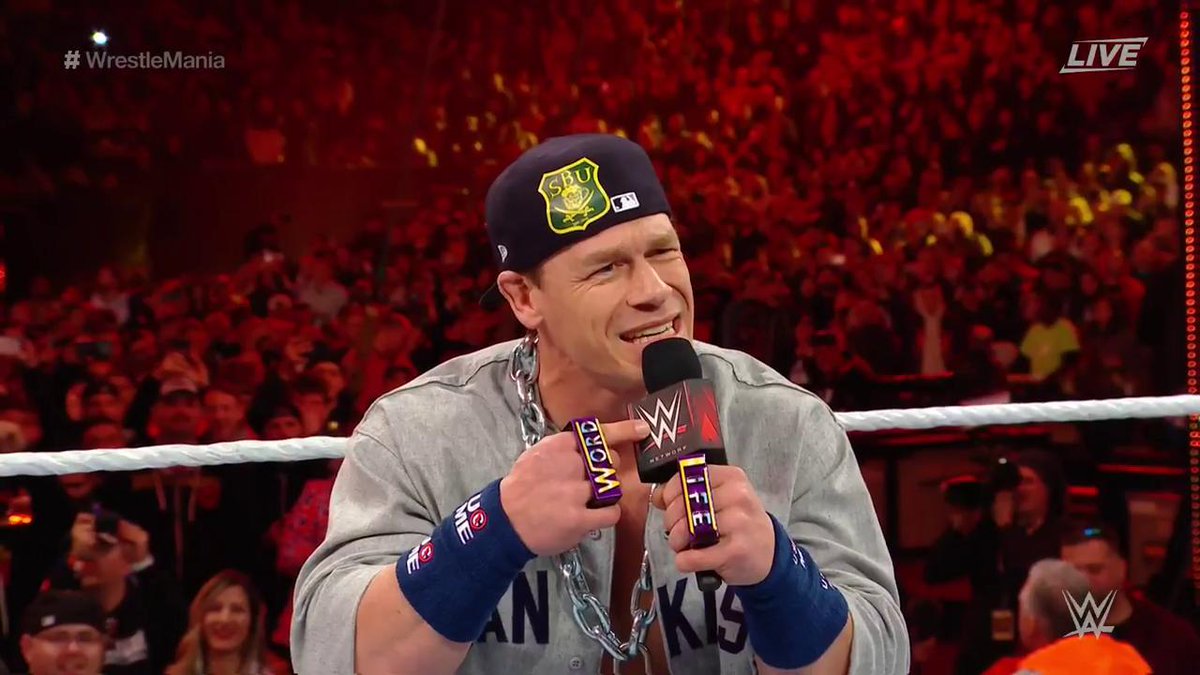 Back from a break and Elias is introduced. He plays a set of drums for several seconds. He is re-introduced and this time he says he's Elias, and plays the piano. Elias is re-introduced once again and this time he's in the middle of the ring with his guitar. The first two intros were apparently taped ahead of time. Elias asks if we've ever seen a more handsome man, and says tonight is going to be very special as he has something planned that's never been done before. He starts playing a song with the piano Elias and the drummer Elias so it looks like all three of them are doing the same performance. Renee says "wow!" at the split-screen technology. Elias calls the performance so impressive. Elias has his other two personas stand and take a bow. Elias tells them he's got it from here. Elias asks MetLife Stadium who wants to walk with him. Elias starts playing some as fans sing with him. He goes on talking about how important and special his performance is tonight. He reminds everyone what WWE stands for - Walk With Elias.

Elias says he wrote something special for WrestleMania for his first song tonight. He says this will be the WrestleMania anthem for years to come. He asks everyone to silence their phones, hold the applause, and shut their mouths. Elias starts playing but a "Special Bulletin" appears on the big screen. It's a retro clip of New York Yankees baseball legend Babe Ruth "calling his shot" years ago. The clip ends and the "Thuganomics" video and theme starts up. Out comes John Cena dressed as the Dr. of Thuganomics.

*Frantically checks what year it is* #WrestleMania pic.twitter.com/HKPv25DKzP

Fans chant for Cena as he hits the ring. He says the Dr. of Thuganomics is back and Elias got a raw deal. Cena raps and mentions how he's about to turn heel. Cena goes on rapping, taking shots at Elias. He decks Elias with the mic and drops him. Cena goes on and hits the Five Knuckle Shuffle, then the Attitude Adjustment. Cena makes his exit from the ring while Elias is down on the mat. Cena stops on the stage and looks back at the crowd, raising his arms in the air.