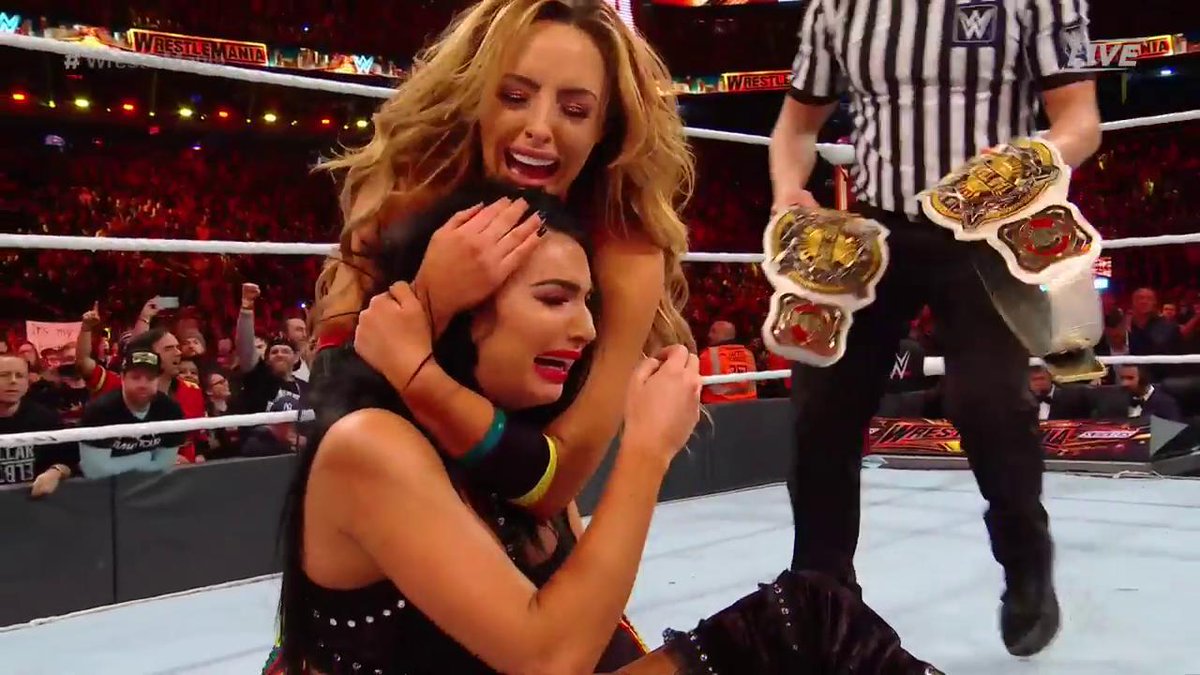 Fatal 4 Way for the WWE Women's Tag Team Titles: Nia Jax and Tamina Snuka vs. Beth Phoenix and Natalya vs. The IIconics vs. Sasha Banks and Bayley

We go back to the ring and Paige introduced as the special guest commentator for this match. She joins Cole and Renee. WWE Women's Tag Team Champions Sasha Banks and Bayley are out first. They stop and pose as the fireworks hit. Nia Jax and Tamina Snuka are out next. Out next are The IIconics, Peyton Royce and Billie Kay. WWE Hall of Famer Beth Phoenix is out last with her partner Natalya. They get an assist walking out with WWE Hall of Famer Bret Hart but he turns and heads backstage before they start on the ramp. They also get a pop of fireworks. Snuka starts off with Bayley and works her over. Snuka stops and starts knocking people from the other teams off the apron to the floor.

Things fall apart for just a minute. Phoenix and Natalya end up driving Jax into the steel ring steps on the floor. Royce is legal with Bayley now. Banks tags in with the double team on Royce. Royce counters double knees and rolls her up. Peyton keeps control and covers Banks for a 2 count. Kay comes in for the double team on Banks. The IIconics do their signature pose for a pop. Banks rolls Kay up for a 2 count. Kay tags in Royce and then knocks Bayley off the apron. Banks gets double teamed again. Royce with a 2 count. Banks with another 1 count on Royce. Banks and Bayley double team Royce now.

Peyton and Kay take turns on Phoenix now. Beth kicks out after Royce drops her. Kay tags back in but Beth blocks their double suplex and hits one of her own. Beth holds Kay as Natalya comes in and they hit the Hart Attack as a tribute to The Hart Foundation. Banks tags in and Natalya takes her right down. Banks and Bayley tangle with Natalya and Phoenix now. The champs get the upperhand on Beth and Banks drops her into a Banks Statement in the middle of the ring.

Phoenix powers up and goes for a Glam Slam but Banks blocks it. Natalya tags in and goes for a Sharpshooter on Banks but Bayley runs in. Natalya drops her. Natalya slams them and applies a double Sharpshooter at the same time. Snuka runs in and superkicks Natalya to break it. Phoenix runs in and nails Snuka. Jax and Snuka come in and clean house now. They double team Beth with a headbutt. The IIconics attack but they get hit with double Samoan Drops. Jax and Snuka continue to dominate. Jax and Snuka climb to the corners while the champions are down. They go for double Superfly splashes on the champs but Phoenix pushes Jax to the floor from up high. Snuka steps down and runs over but Natalya and Beth drop her at the same time. Banks with knees from the apron to Beth and Natalya on the floor. Banks brings Natalya in the ring and Bayley tags in for the big flying elbow drop. Banks goes to the top rope and hits a Frogsplash to Natalya for a close 2 count. Banks unloads on Natalya in the corner now. Bayley and Sasha double team Natalya in the corner, taking her to the top for a double superplex. It's broken up. Bayley and Phoenix tangle up high. Phoenix goes for a huge super Glam Slam from up high and she hits it but The IIconics steal the pin as Key pins Bayley for the titles.