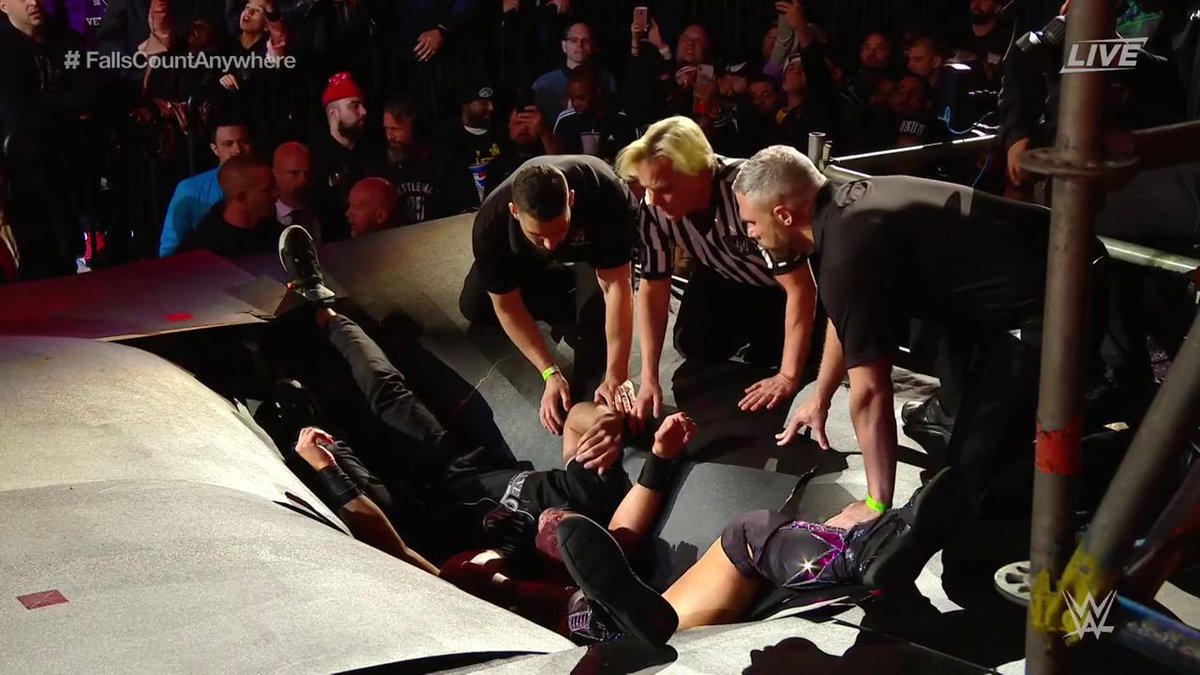 Miz is ready to fight. He goes at Shane again after the bell this but Shane retreats to the floor. Shane keeps teasing he will re-enter the ring but Miz charges and Shane backs off. Shane grabs Miz's dad George at ringside, by his face. Miz snaps and chases Shane around the ring but Shane drops him on the floor. Shane brings it back into the ring and beats Miz around. Miz tries to fight from his knees but Shane rocks him with punches and kicks.

Miz looks to turn it around but Shane sends him back out to the floor. Shane takes apart the announce table now. Shane rocks Miz and places him on the table, then hits him in the head with a monitor. Shane goes back to the top and is ready to leap from the top turnbuckle to the announce table but Mr. Miz comes and stands in the way to protect his son. Shane comes down from the top and invites George into the ring. George enters the ring and puts his fists up to fight.

Shane taunts and toys with George. Shane with a kick to the gut to back George into the corner, kicking away on him as he goes down. Miz snaps again and hits the ring, unloading on Shane. Miz brings Shane out of the ring and tosses him into the barrier. Miz goes from barrier to barrier with Shane head-first. Miz throws Shane over the top of the barrier and into the crowd. Miz stops and goes back to check on his dad. Miz calls for someone to come check on his dad. No one is coming. Miz sends a ringside trainer over to check on him. Miz jumps up on the barrier and leaps off into the crowd, tackling Shane and beating on him.

Miz takes it to part of the set support structure and rams Shane into a LED board. Miz keeps control but Shane comes back and rams him face-first into the LED board. Shane with kidney shots and a big DDT on top of the support structure. Shane covers for a 2 count. Shane gets knocked off the structure to the concrete and he lands bad, hitting the back of his head. Miz follows and attacks the damaged knee.

Miz with steel chair shots to the back and the knee now. Miz keeps control and knocks Shane into the row of international announce teams. Some fans chant "holy s--t!" now. Miz is tearing apart the row of announce tables just to get to Shane and keep the attack on him. Miz sends Shane through a table and covers for a 2 count. Miz grabs a small piece of production equipment, like a cable box, and smacks Shane in the face with it, knocking him over a barrier to a platform about 8 feet down. Miz goes on and covers for a 2 count. They end up fighting over to an area built up with scaffolding.

Miz ends up nailing the Skull Crushing Finale from the railing to the wood on the scaffold but Shane still kicks out at 2. Miz throws Shane over the railing of the scaffold and he lands on another platform down below. They end up high on the camera scaffold, way above the crowd. Shane begs and pleads with Miz to take it easy. Miz grabs Shane and nails a massive suplex from up high, down to a platform on the floor, 15 feet or more. Everyone is shocked. Fans immediately start chanting "holy s--t!" at the big spot. A referee is standing above them. They're both laid out, still in the position they landed in from the suplex. The referee counts and gives the match to Shane, apparently saying he had the advantage in the landing.