Teddy Hart, a member of the legendary Hart wrestling family, was arrested on Tuesday night in Richmond, Virginia.

Hart has had his share of legal issues throughout the years. He was arrested in December of 2014 by the Royal Canadian Mounted Police on multiple sexual assault charges involving two women, which were dropped in June of 2016. He was most recently arrested on January 1, 2017 after attempting to evade arrest after being pulled over for a hazardous traffic violation in Arlington, Texas. Those charges were also eventually dropped.

Hart recently worked for MLW, but was released last December.

Hart is scheduled to appear in court on April 23rd. You can see Hart's mugshot below: 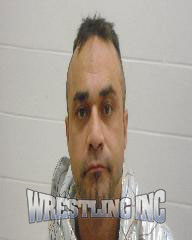 JobbingPaysTheBills contributed to this article.