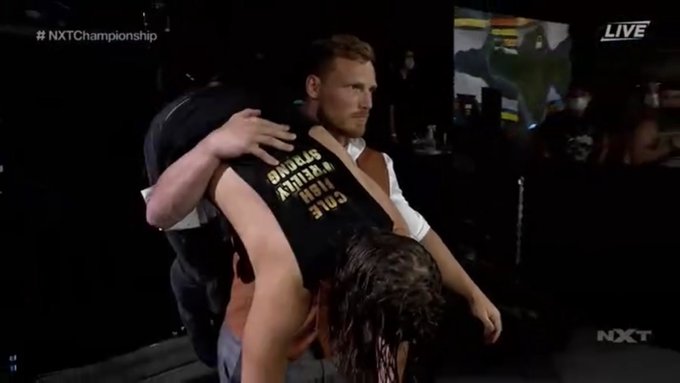 Ridge Holland has started a new feud with The Undisputed Era.

Tonight's WWE NXT "Takeover: 31" main event saw NXT Champion Finn Balor retain his title over Kyle O'Reilly in a hard-fought back & forth match. The post-match angle saw champion and challenger show each other respect as they stood together in the middle of the ring.

Holland suddenly appeared at ringside on the other side of the barrier, with an unconscious Adam Cole laid out over his shoulder. Holland stared back at the ring until Balor and O'Reilly stared back at him. Holland then dumped Cole over the barrier, to the floor at ringside. Roderick Strong and Bobby Fish then ran down to the ring but Holland disappeared. Takeover went off the air with a furious Undisputed Era, and Balor, tending to Cole at ringside.

Holland, also known as former UK rugby player Luke Menzies, recently came to the main NXT brand after a stint in NXT UK. He was signed by WWE in May 2018 after working a tryout in November 2016. His in-ring TV debut came on the August 29, 2018 NXT show, losing to Keith Lee. His last NXT UK match came in March, a loss to NXT UK Champion WALTER. Since coming to the main black & yellow brand at the end of July, Holland singles losses to Johnny Gargano and Ridge Holland. He also lost a Triple Threat, with Oney Lorcan, to current NXT North American Champion for his first match back on the brand on July 29. Last week's NXT TV show saw Holland defeat enhancement talent Antonio De Luca.

It was recently reported that WWE had plans to split The Undisputed Era up. You can click here for the report on those plans. Stay tuned for updates.

Below are a few shots from tonight's "Takeover: 31" angle at the Capitol Wrestling Center, formerly known as the WWE Performance Center, in Orlando:

INCREDIBLE MATCH from START to FINISH.