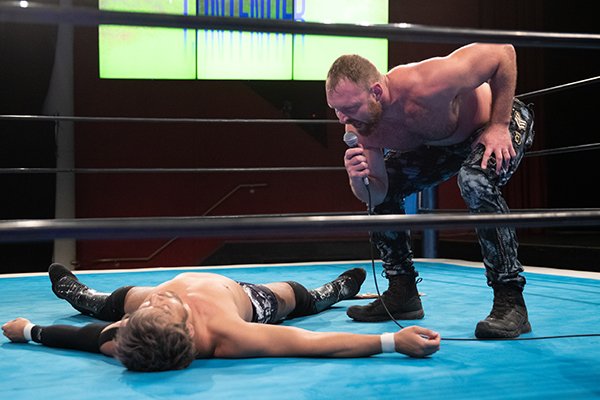 IWGP United States champion Jon Moxley appeared at the end of this week’s NJPW Strong to confront KENTA, who earned a shot at his title by winning the New Japan Cup USA tournament last August.

Moxley appeared in the aftermath of the main event match between Lio Rush and El Phantasmo. After Rush picked up the win, Bullet Club members KENTA and Hikuleo attacked Rush, Fred Rosser, and TJP.  That’s when the lights went off and Moxley appeared with the IWGP U.S. title and laid out Hikuelo and ELP with his belt.

KENTA and Moxley then traded blows, with KENTA attempting to hit the AEW star with the GTS. Moxley countered and hit his Death Rider DDT finishing move.

The show ended with Moxley cutting a promo, in which he said KENTA’s dream of taking away his title just became a nightmare. Moxley then vowed to face KENTA in Tokyo “one of these days” without specifying a time or place.

Moxley became the IWGP United States champion when he beat Lance Archer at Wrestle Kingdom 14 last year. He has been unable to travel to Japan to defend his championship due to the ongoing pandemic.

'I'll see you in Tokyo one of these days, however we gotta get it done, we'll get it done!'

Previous
Jim Ross Agrees With The Undertaker On The Toughness Of Wrestlers Today
Next
WWE Hall Of Famers Reunite, Announce Return To The Ring