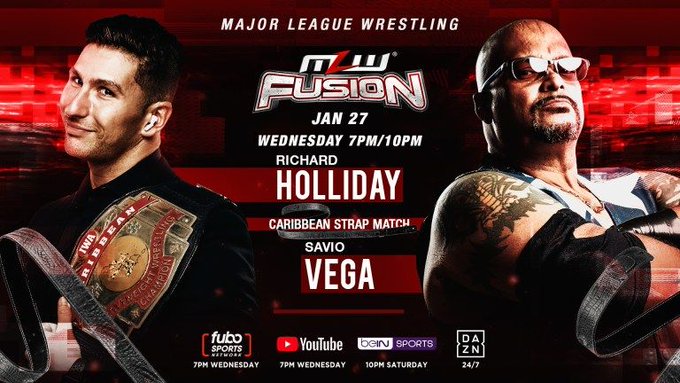 After stealing the IWA Caribbean Heavyweight Championship last year, Richard Holliday will be knocking on hell’s door when he defends his unrightfully unclaimed title against its former and longest champion Savio Vega in a Caribbean Strap Match tonight on MLW Fusion.

Vega laid out the challenge last week, calling Holliday “a thief” who has no right to defend a title that he did not successfully win. Holliday fired back against Vega’s claims and said that he spoke to his father/lawyer about the matter and decided to go against his wishes to defend this title in such gruesome circumstances. Will Holliday retain, or will Vega bring the title home?

MLW has also announced that TJP and Bu Ku Dao will challenge Violence is Forever (Dominic Garrini and Kevin Ku) in a Tag Team Title Eliminator match. The winning team will face Los Parks for the MLW Tag Team Championship at a later date.

Be sure to follow our live coverage at 7 PM EST!