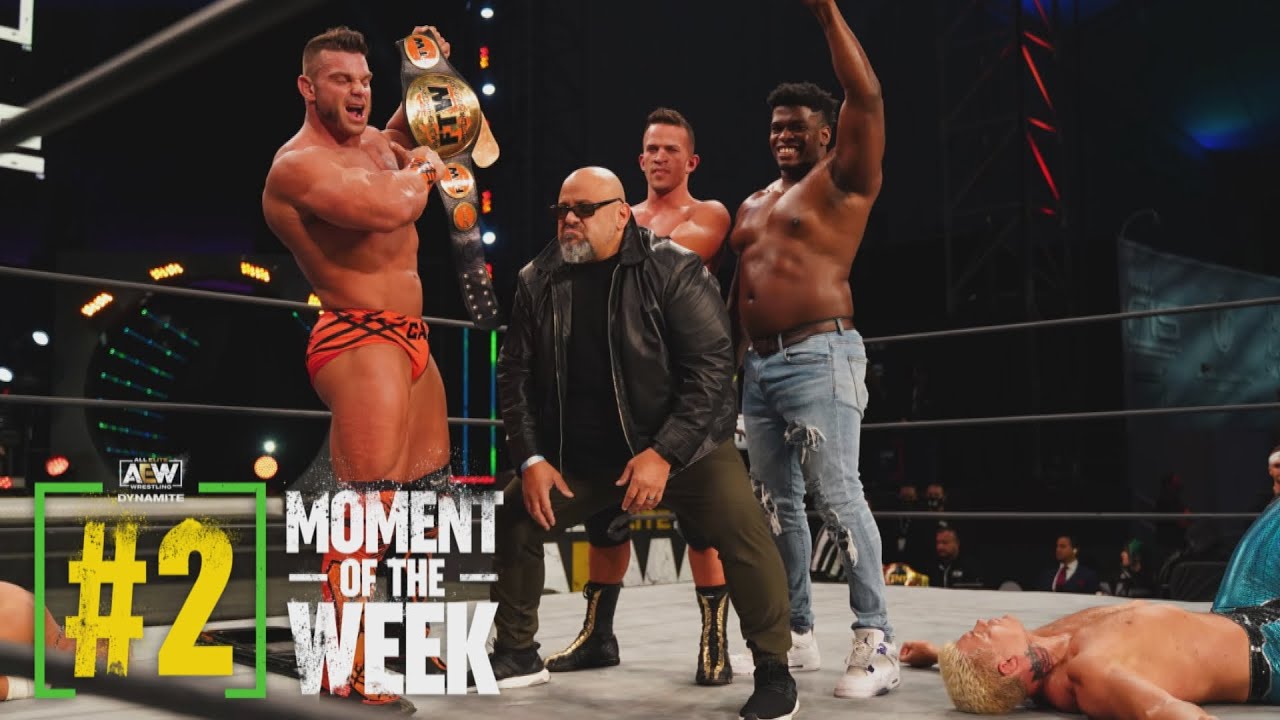 Powerhouse Will Hobbs was on a recent episode of the Talk Is Jericho podcast where he discussed his beginnings in AEW. He recalled getting a text from QT Marshall to appear on Dark and thinking the text was a rib.

“I get ended up getting a text from QT, and I thought somebody was ripping me,” Hobbs admitted. “I looked at it, put my phone down [and] answered it a couple hours later, and it said, ‘Hey this QT Marshall from AEW. Are you local to the Jacksonville area?’ I said, ‘No, but I’ll find a way to get out there.’ So Markus Mac, he actually is the promoter and owner of All Pro Wrestling, and I believe he reached out to Cody. And I believe Cody remembered me from the couple shows he did in the Bay Area.”

Hobb’s first match in AEW was against Orange Cassidy, who at the time, was in a feud against Chris Jericho. Hobbs recalled seeing the match was set to be less than 30 seconds long, and he also recalled Cassidy apologizing to him for the match being so short.

“I go to the famous board and see who I’m supposed to work. It says Will Hobbs vs. Scorpio Sky,” Hobbs recalled. “I’m like, okay, I know Scorpio from Cali. We’ve been on a few indie shows. I go eat, come back and check the board. It says Will Hobbs vs. Orange Cassidy, and I’m like, ‘Oh s**t.’ At this time you and Orange had that feud going. So I’m thinking in my head, I’m working the hottest baby right now who’s in a feud with the hottest heel? I’m like, ‘This is about to be on,’ then I look over at the time.

“It says 30 seconds. I’m like, okay, this is cool. I figured it was coming, and I ran into Orange. He introduces himself to me, and he’s like, ‘Hey man, sorry about this. You’re not getting a lot of time.’ I said, ‘Look, I’m here to do a job. You’re working with the hottest heel right now. You’re the hottest baby right now. There’s a size difference between us, and I’m thinking in my head, nobody’s going to expect me to take any s**t,’ but we worked out the match. Orange and I are talking, goofing off [and] talking about James Brown albums, and comes to the time, Orange’s in the ring.

“And he puts his hands in his pocket. I’m talking junk to him in the ring, and I charge him. He moves. Superman punch, boom, one, two, three and I’m kind of peeking out my eye, looking around the crowd, and I see people in the audience just looking like what the hell happened. And I knew then from there, this has to be on some replays, and it was. The package you guys had, they showed a couple clips of him knocking me out. It’s awesome. I cannot complain.”

Hobbs said after the match, he was contacted by a lot of people questioning why he lost so quickly to Cassidy. Hobbs said he understood that his job was to build Cassidy as a stronger contender to go up against Jericho.

“I was getting blown up,” Hobbs stated. “People telling me, ‘Why did you do that? Why did you drop out like that?’ And I’m thinking in my head like, if you were here, you’d be doing the same thing. It’s not about me winning. It’s about me making him look good because he’s going into something that’s way bigger than me.”

Hobbs has discussed his reaction to Sting’s debut in the past. He is admittedly a big fan of Sting’s since he was a kid, and he talked about getting to meet Sting.

“It was after we did the segment,” Hobbs recalled. “He came up to me and thanked me, and I’m like, ‘Thank you! You were a big influence in my childhood,’ and he’s like, ‘That means a lot.’ And he looked me in my eyes like, ‘We need to talk.’ I truly appreciate that.”

Later in the podcast, Hobbs talked about his favorite matches in AEW so far. One of the matches he named was the six-man tag team match at the Brodie Lee Celebration of Life show, and that led Hobbs to talk about how much of a help Lee was when since he joined AEW.

“My favorite match that I’ve had since I’ve been here, it’s a tie between when Ricky [Starks] and I went up against Darby and Cody [Rhodes] and the six-man we had for the Brodie tribute. It was a Team Taz, myself Ricky, and [Brian] Cage vs. 10, Cody [and] Cassidy. It was amazing.

“The time that I was here that I got to know Brodie was amazing because right after my first Dark match with Orange, he pulled me aside and talked to me, and ever since, every match that I’ve had, he watched [and] always gave me advice. So that was just awesome because my whole family loved him when he was in The Wyatt Family.

“He was a real good person, and that meant a lot to me for him to pull me aside, didn’t know me, to say, ‘Hey, you’re a big man. Don’t do this. Try this. This worked. That didn’t work. I remember I did a frog splash in a match, and he told me, ‘I know you can do it, but you don’t need to do it.’ And I ain’t done it since.”