Bushwhacker Luke Recalls Andre The Giant Tipping Over A Car 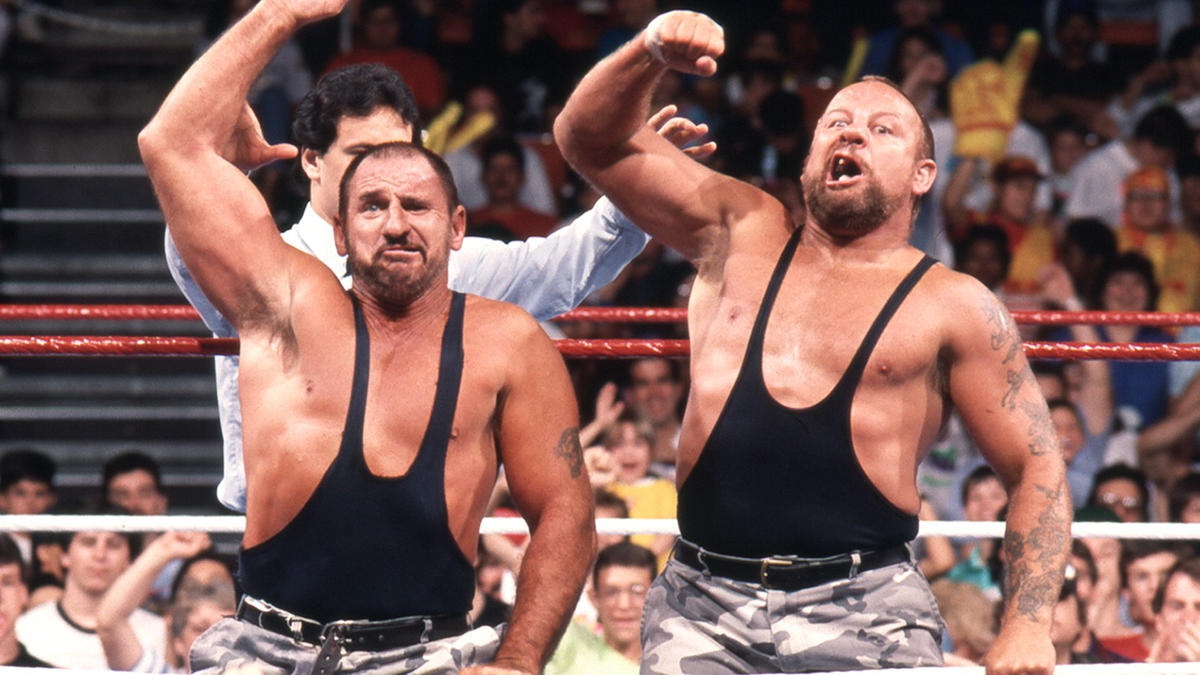 During their in-ring career, the Bushwhackers worked with a number of wrestlers. While the duo were known to mostly wrestle tag teams, they had a series of handicap matches against a certain Eighth Wonder of the World.

Speaking to Wrestling Epicenter, Bushwhacker Luke discussed what it was like to wrestle Andre the Giant.

“We knew Andre the Giant for years. He was wrestling us in New Zealand in the 60’s before he ever came to the States,” Luke said. “We did handicap matches with Andre against me and Butch. If I told you some of the high spots that the people went crazy about, you’d laugh today. I’ll give you an example. We would kick him in the stomach, he would double over, and we would each grab and arm and put him in a top wrist lock. He’d stand up straight and we’d be hanging! He was 7’3 or 7’4! Our feet would be off the ground by a solid foot! He would swing his arms to the left, swing his arms to the right like he was on the cross, and then bring his arms together. We’d hit each other, fall to the floor, and roll to the outside and the crowd used to go bananas! That was how simple we did things those days!”

Being on the road together for years, the Bushwhackers and Andre spent many nights out together. Luke recalled how Andre was able to drink a beer faster than anyone he had seen before.

“When we came to North America in 1972, we went to a territory called Grand Prix – The Vachons brought us to North America,” Luke said. “They owned the territory. Andre had come to North America about 6 months before us. Killer Kowalski was the biggest heel. We had known Killer since 1966 because we worked for Jim Barnett’s WCW, World Championship Wrestling which was down in Australia from 1965 to 1972. Andre was on the road with Dominic DeNucci who is still alive – His birthday was just the other day. He turned 88! Anyway, Andre was on the road with his manager… A French guy. I can’t remember his name. This has really got me down, mate. I’m having a brain fart! (laughs) They had 72 beers. A can of beer was only 2 gulps for Andre. In a couple of hours, Andre had drank 36 beers!”

“So, we stop at one of those 24/7 truck stops to get more beer,” Luke said. “There was a diner on one side and the gas station is on the other. These French kids were on school holiday. They got out of the car and they see us, black bears and blond hair, and they’re screaming [homophobic slur] at us. There was 4 of them and they came out that car f–king drunk. We go in to the place to grab a snack and Andre’s mate follows us in a few minutes later. He told us Andre heard what they screamed at us and went to their Volkswagen, picked it up, and tipped it over on its side! Do you remember how big those Volkswagen’s were in the 70’s? That is how strong Andre was. He put that son of a b---h on its side!”

While the Bushwhacker’s schedule is not as busy as it was back then, he does have an upcoming appearance at the WrestleStock event in April.

“I’m getting excited for this event happening April 9th and 10th,” Luke said. “It is called WrestleStock! I’m excited to be there, mate! One thing I’m sad about is Butch not being there. But, I’ll try and make up for Butch. Maybe I’ll sit in one chair and be Butch and then go to the other chair and be Luke!”

Aside from their iconic entrance, the Bushwhackers were known for licking each other’s heads. Considering everything going on right now, Luke emphasized that signature Bushwhacker gesture is being put on pause for now.

“No (laughs). But, it is funny that you brought that up,” Luke said. “Someone took a picture of Butch licking my head from the 90’s and captioned it, ‘This is How Coronavirus Spread in the United States!'”