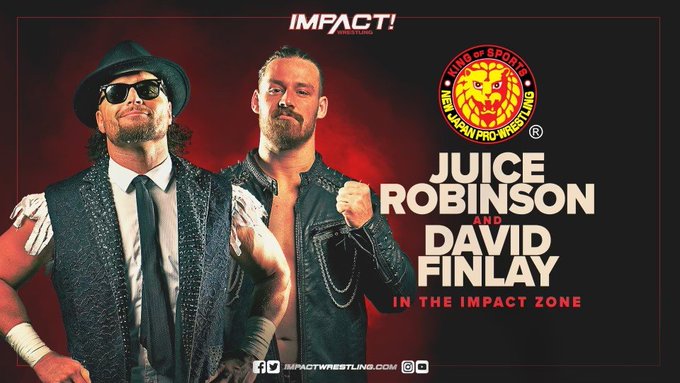 Just before Impact Wrestling’s exclusive event, No Surrender went off the air, the company teased that the former IWGP Tag Team Champions, FinJuice (David Finlay and Juice Robinson), are now on their way to Impact Wrestling this Tuesday.

With the forbidden door now open between AEW/NJPW/Impact, anything goes as to who will show up in each company. For Robinson and Finlay, this will be the first time either man has worked for Impact.

Finlay has been a part of NJPW Strong here in the states since it launched in August. Robinson, on the other hand, was out with a fractured orbital bone injury since December. This cost him an opportunity to face KENTA at Wrestle Kingdom 15 for the No. 1 Contender spot to Jon Moxley’s IWGP United States Heavyweight Championship.

David Finlay and Juice Robinson are coming to the Impact Zone!

FinJuice will be on @IMPACTWRESTLING Tuesday at 8/7c on AXS TV and Twitch!https://t.co/sYxXeHWrkI#njpw #IMPACTonAXSTV pic.twitter.com/J7IDYsJ77j

Previous
Sami Zayn On Roman Reigns: “He Started Playing [WWE] Instead Of Being Played By Them”
Next
Booker T On How Bad Bunny Was Backstage Before The WWE Royal Rumble PPV