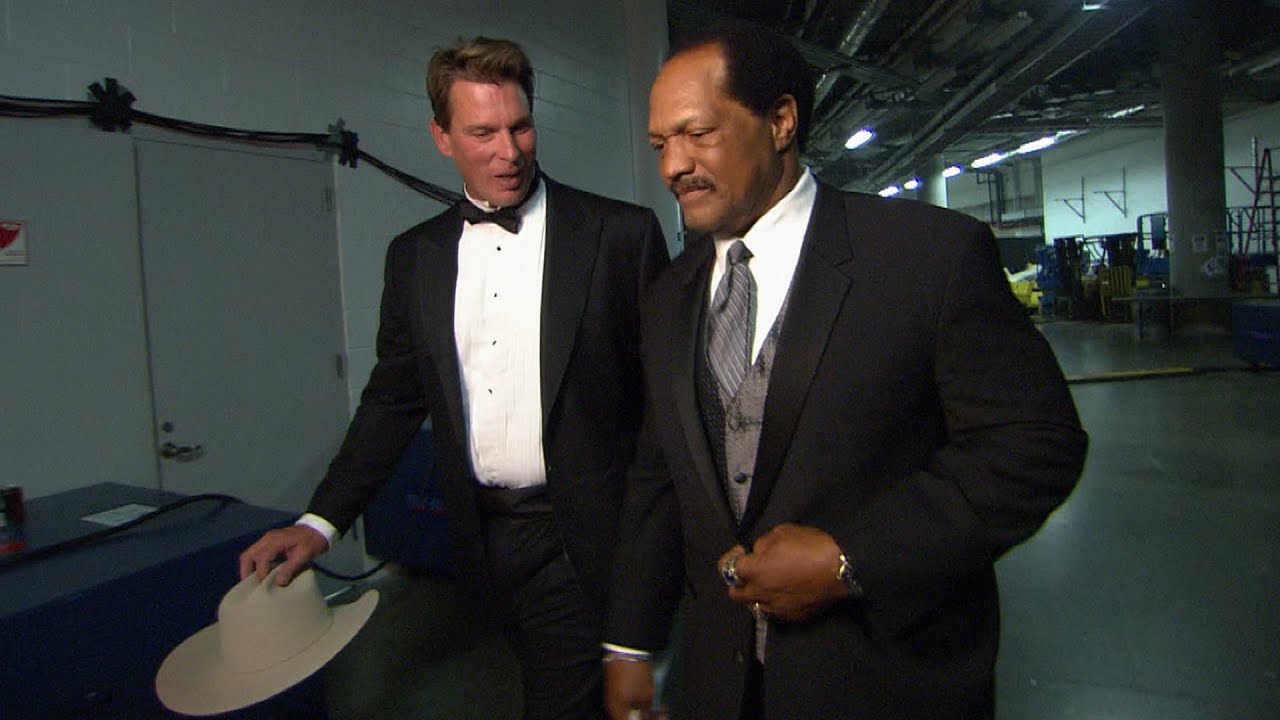 On the latest episode of WWE’s The Bump, Hall of Famers Ron Simmons and JBL joined the panel to talk about their journey as APA. But before they delved into their six-year partnership, JBL gave Simmons one of the greatest compliments he could hear.

“It’s funny, Ron’s influence as the first African-American champion…I’ve been at places where I’ve worked with some low-income, at-risk kids…It’s funny because when you start losing the kids’, you know, their attention span like any kid, [they see] a butterfly, and they’re gone. I’d tell them Ron Simmons stories, and as soon as I would, they’d be like, ‘Tell me more. Tell me more.’ So, Ron’s influence has gone way beyond just that single day back with Vader in ’93,” JBL mentioned with a big smile.

The panel took a look back at their two-year stint as The Acolytes from 1998-2000. Panelist Kayla Braxton asked both men what was the inspiration behind the symbols they once wore on their chests.

“It was from The Necronomicon,” JBL replied. “It was this old book. I don’t know, some type of black magic ritual or something. I dunno what idea they had in mind with that or something with the acolytes in the Ministry of Darkness or something. I never fully understood it. I remember I’d paint mine on, and I’d paint Ron’s on, and we’d go out there. We legitimacy had no idea what it was or what we were doing with it.”

Six years later, in 2004, APA found themselves in a career-defining match with their jobs on the line against Rikishi and Scotty 2 Hotty on SmackDown. After losing the match the then general manager, Paul Heyman, decided to fire Simmons and keep JBL, which launched his big singles run. Storyline-wise, both men agree it was the best way for Simmons to leave the company, so he could focus on retirement. But on a personal level, JBL hated to see his friend go.

“We knew it that it wasn’t gonna last forever. You know, we couldn’t be doing it to this day,” JBL added. “We can go back and do the backstage stuff, but we wouldn’t be in the ring now, you know, backing that up anymore. So, we knew at some point it was going to end, which I hated. I would’ve been happy being an APA member my entire life. If JBL had never happened and I retired at the end of APA, I’d be perfectly fine with that.

Simmons added that he knew it was JBL’s time to become a singles champion, so he thought it was best to take his leave so JBL could focus on what would become the start of his well-decorated part of his singles career.

“For me, you know I love this business, right? When you’re in a tag team, no one, absolutely everyone, almost prays that you get the run that we did. I was very grateful that we went as long as we did and had the success that we did…It was his time now, you know. He had paid his dues, and he had put in his time to where now this catapults him to the next level.”

Simmons concluded his interview by saying that it was a dream come true to see both his and JBL’s careers showcased when they were inducted into the WWE Hall of Fame in 2012 and 2020 – although last year’s ceremony was postponed and possibly set to happen in April. He says things like this only happen in fairytales.

“It really is a fairytale type of story to evolve and come true,” Ron Simmons said about him and JBL’s Hall of Fame Inductions. “You go back and look at not just when you first started, but you go back and look at the journey of it. Neither one of us talked about the Hall of Fame or championships and winning any of them. And then, when you get to that moment, for myself, being inducted into the Hall of Fame by someone that you consider to be a best friend and brother to you, and then later you see him go into the Hall of Fame, I mean, you just cannot…it’s almost as if you’d have to write [that].”

You can watch Ron Simmons and JBL’s full interview here. If you use any of the quotes in this article, please credit WWE’s The Bump with a h/t to Wrestling Inc. for the transcription.