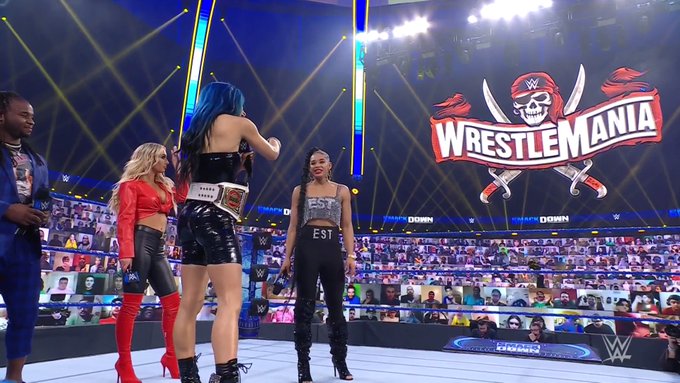 Although the 2021 Women’s Royal Rumble winner potentially teased fans by standing in front of the SmackDown Women’s Champion Sasha Banks and other challengers like Carmella, Belair is still cautious on which women’s title she’ll be going for at this year’s WrestleMania. Despite the WWE Universe and backstage interviewers asking her over and over again which title she’ll choose, she gives them all the same answer; she will announce her decision soon.

This week on Talking Smack, she informs hosts Kayla Braxton and Paul Heyman that she will make her final decision once she’s confident enough to do so.

“Kayla, you asked me this earlier! Everybody keeps asking me. Listen, I’m trying to get my emotions in check,” Belair began. “This is the biggest decision of my career. And they’re two amazing women. I cannot make a decision right now. It’ll be soon, but not today.”

Regardless of which title she’ll proceed towards, Heyman wanted to make sure the “EST of WWE” knew just how beloved she is in this industry. He complimented her rise from her days in NXT to where she is now. In his opinion, he sees her walking out of WrestleMania 37, the new women’s champion.

“You are the B-E-S-T of WWE,” Heyman complimented. “To me, it doesn’t matter which champion you step into the ring [with]. You will go on the day of WrestleMania to the biggest event of the year as a challenger. You will leave WrestleMania as a champion. That’s not a prediction: that’s a spoiler.

“And then, you will have a chance, at such a young age, to craft out not only a legacy, but what will be looked back on many years from now — decades from now — the legend of Bianca Belair. There is no one in your league right now. No one.”

You can watch Bianca Belair and Paul Heyman’s full interview on the WWE Network. If you use any of the quotes in this article, please credit Talking Smack with a h/t to Wrestling Inc. for the transcription.

Previous
WWE Superstar Lana Shares Swimsuit Photo From Maxim Feature
Next
The Bushwackers Recall Brutal Attack On Carlos Colon: “There Was Blood On The Walls”