Riddle On Who He Thinks Will Be “The Next Big Thing” 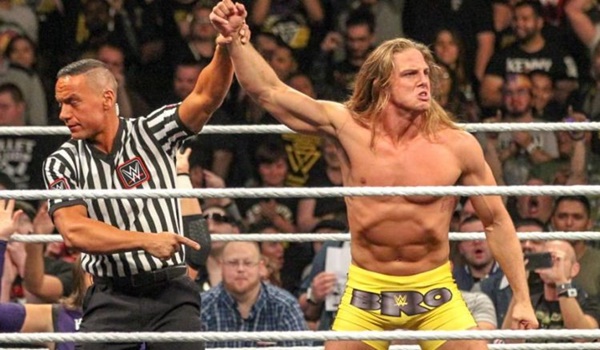 Before he started wrestling, Riddle was a mixed martial artist who competed for Bellator and UFC. The Original Bro would make the transition to the squared circle in 2014, quickly racking up championships in multiple independent promotions.

Speaking to ViBe & Wrestling, Riddle acknowledged the easy transition physically, but noted the live atmosphere took some getting used to.

“My transition from MMA to wrestling, my physical transition was easy. I was fighting, suplexing, kicking, that part was pretty easy,” Riddle said. “The hardest part for me was working in front of a live crowd, entertaining people and connecting with people. In MMA I don’t have to connect with anybody. I just have to punch people in the face and stay focused on the match, while here not only do I have to stay focused on the match but I have to be focused on entertaining people, connecting with them and making them feel something. The transition was pretty smooth as I was always a fan of pro wrestling and this is something I loved and something I always wanted to do. When I saw the opportunity I took it.”

After conquering the indie scene, Riddle signed with WWE in 2018. Riddle would work with the NXT brand for three years before getting called up to the main roster.

One of Riddle’s final storylines on Wednesday nights revolved around the Dusty Rhodes Tag Team Classic. Riddle and partner Pete Dunne, collectively known as the Broserweights, would go on to not only win the tournament, but beat the Undisputed Era for the NXT Tag Team Titles at NXT Takeover: Portland. Like the Broserweights, 2021’s Dusty Cup winners were a team new to NXT.

Wes Lee and Nash Carter took home the W at NXT Takeover: Vengeance Day and will challenge Oney Lorcan and Danny Burch for their tag titles soon. Riddle had high praise for the duo known as MSK, applauding their in-ring ability as well as their charisma.

“MSK, they are awesome. I know those guys, I wrestle them in the past and they are hard workers, they get it, they are entertaining,” Riddle said. “I mean did you see those guys eating pop corn the other day? They are very charismatic. They don’t care what you think about them and they delivered. Honestly I felt bad for Grizzle Young Vets because they got to the finals again and they didn’t win.

“But what a great start for MSK, winning the Dusty Cup on their first time in the tournament. I am happy for them. They are a couple of good bros.”

Riddle has previously made headlines for his infamous interest in facing, and retiring, Brock Lesnar. While a match-up between the Bro and the Beast seems unlikely, Riddle mentioned he might be able to mix it up with the next best thing: Parker Boudreaux.

WWE’s hot new recruit has been compared to a young Lesnar for months due to their physical and facial similarities. While higher-ups have acknowledged Boudreaux has a ways to go, many within WWE have big aspirations for the prospect.

Riddle revealed he’s spoken with Boudreaux, and commended his drive to succeed.

“It seems more realistic to get a match with Parker,” Riddle said. “I’ve seen Parker, talked to Parker and the conversation it went a lot better that it did with Brock. Parker is like a young kid. He is hungry, he wants to sink his teeth into this and he is making the right moves in the sense that he is presenting himself to the world properly. He seems hungry, he seems like he is trying to learn as fast as he can so he can be a part of the show as soon as he can. If you are hungry and you can bring something different to the table, you are going to be somebody in this sport.

“I think he brings all that so you never know, only time will tell, but right now I think that this Parker guy, this Boudreaux guy, I don’t know if that’s the name he’s going to stick with. I think he called himself ‘The Destroyer of Gods.’ I don’t know if that’s gonna make it and pass the writing team, you never knows. The guy looks phenomenal. He has a great gift and only time will tell, but I think he is going to be ‘The Next Big Thing.'”