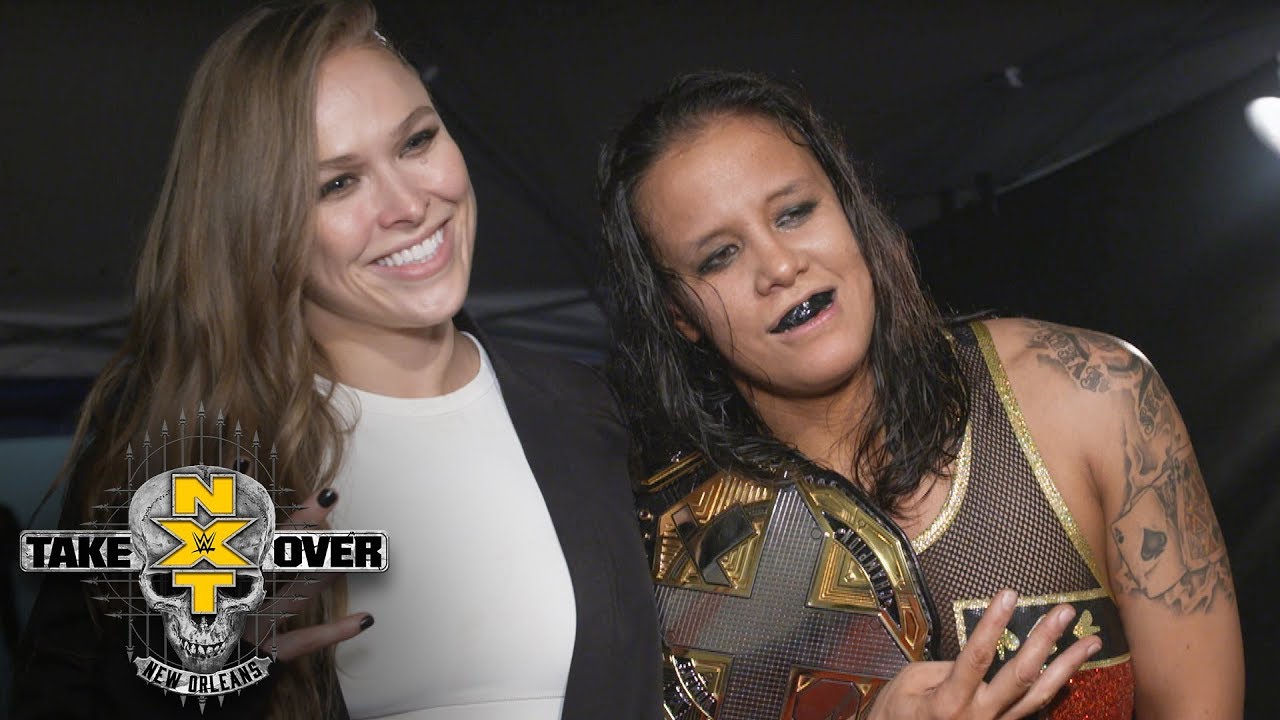 Just before she became the NXT and Women’s Tag Team Champion in WWE, Shayna Baszler came to a fork in the road on where her fighting career was going to go. This week on Oral Sessions with Renee Paquette, Baszler reveals what led her to jump ship from being a full-time MMA and UFC fighter for 16 years to honing her skills as a pro wrestler.

“I had a fight against Amanda Nunes. I got a partial tear in my ACL at that fight. Thankfully, I didn’t have to have surgery. I just had to stay off of it for a while,” Shayna Baszler began. “Just the way the UFC was at the time – I don’t think people realize this about fighters, but you don’t have a schedule on when you’re going to fight. It could be two months until you fight or a year until you fight. Knowing I was going to be sidelined with this injury and I’d be thrown at the back of the line, I just didn’t know when I was going to be fighting next.

“I was at a stage in my career where I fought for 16 years – and this is going to cause a lot of people I bet to comment or something – I think the popularity of MMA and the most visible part of my career being on this, like, tail side of my career, made me get jaded and despise MMA. So, what started happening was I started having a couple of fights where I was in there, and I just didn’t care to work as hard as I needed to win. I fell out of love with it. I can sit and point to a bunch of different reasons why, and I’m not making any excuses by any means, and I’m not ashamed to lose to Amanda Nunes, obviously. I just didn’t love it; it was work.”

Baszler also added that Josh Barnett played a pivotal role in helping her break into the pro wrestling industry.

“I think Josh was seeing that. And he said, ‘Hey, why don’t we see if the UFC will let you do some pro wrestling,'” she added. “They immediately said no. So, it was like, let’s just retire, so if you decide to ever want to un-retire, you can just fight again. That’s what happened, and I started doing wrestling, and I just started falling in love with it. It’s what caused me to find my love for MMA again.”

After leaving the octagon for the squared circle, Baszler took her prized fighting tactics over to Japan, where she would work for World Wonder Ring Stardom off and on from 2015-2017. Although she never successfully obtained any gold possessions there, she says working overseas taught her how to build a fanbase and continue introducing fans to other forms of combat sports like MMA.

“I think going to Japan before I got signed [to WWE] really helped ’cause the Japanese wrestling fans really understood my style of wrestling a lot faster than American fans or fans from the west,” she noted. “When I was in Japan – and Josh can attest to this – I was the one who wanted to do all the cool stuff. Nobody cares that I’m twisting someone’s arm. But Josh was like, ‘No. You’re doing things that no other girl can do. Any girl can do a missile dropkick off the top. But you can grossly bend someone’s arm; you’re someone in the audience that can make fans look through their fingers. Don’t lose that. I think going to Japan, I was like I get it. I am doing cool stuff.”

Following her vicious debut on Monday Night RAW on February 10 of last year, Baszler has been under Vince McMahon’s radar a lot more than she was during her days on the black and gold brand. She recalled an enlightening conversation she has had with the Chairman about his expectations of her and how nice he can be behind the scenes.

“It’s nerve-racking,” she mentioned with a nervous laugh. “You come in with this image that he’s this crazy guy, but he’s always so nice and critiques me real well.

“When I first started wrestling on RAW, he gave me a talk that was like, ‘Look, you have something different to offer. You have a unique look. [But] the thing you have to start learning on RAW is that your work rate is shown on pay-per-views and at NXT. Don’t get so hell-bent on weekly RAW TV because that’s where we build the stories for the work rate that you can do on a pay-per-view. You have this thing; I don’t want you to do any pro wrestling. Got it?'”

With no expected date on Ronda Rousey’s return to WWE yet, Baszler says once the former RAW Women’s Champion returns, she would love nothing more than to have a WrestleMania-worthy matchup with “The Queen of Spades” versus “The Baddest Woman on the Planet.” In fact, they vowed to each other that this was going to happen as far back as when they were in the UFC.

“You know what’s funny, after the Ultimate Fighter, I was at a stage in my life where the world fell apart,” she started off by saying. “I went through this stupid breakup, and I broke my ankle. “So, Ronda had flown me out to California. I went out there, and she helped me. I remember we were sitting around – I can’t remember what the reason was – but we were celebrating something. I remember toasting her and saying, ‘I’m going to give you the fight that you deserve to thank you for what you did for me and my life.’

“Ronda and I have talked about it, and at the time, that meant MMA. But now, that could mean this [in WWE], you know. That’s a WrestleMania…well, WrestleMania is coming up, so it might not be this one, per se, but it’d have to be a spot where it’s us as teammates. But as a teammate, you’re never going to deny them a shot if they’ve earned it. So, it would have to be one of those things.”

You can listen to Shayna Baszler’s full interview here. If you use any of the quotes in this article, please credit Oral Sessions w/Renée Paquette with a h/t to Wrestling Inc. for the transcription.