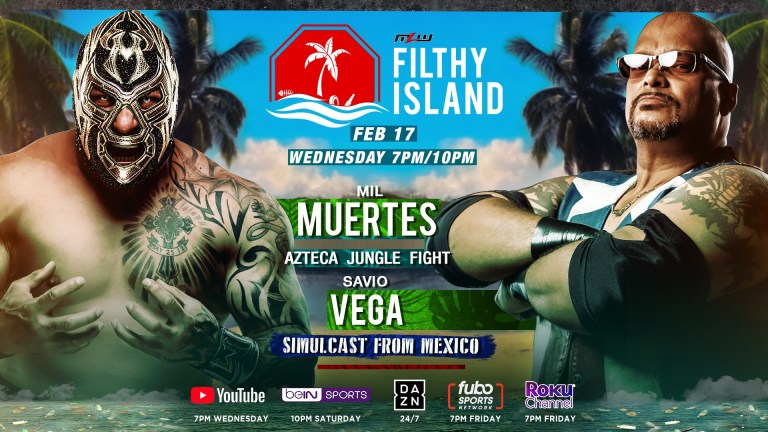 “Well, yeah, it’s the first event that anybody has had the balls to let me put on, let me just say that,” Lawlor stated. “I kind of forced MLW’s hand by winning the 2020 Opera Cup and dominating the competition for the last year and what better way to capitalize on that than giving me an opportunity to promote a show? Air it live on MLW Fusion, Filthy Island!”

Lawlor continued talking about organizing everything centered around the event’s location of Hawaii. He expressed his excitement for the show and how he is built for these kinds of challenges.

“Well, it’s very tough to get these sorts of things organized, especially when you’re working outside of your normal environment,” Lawlor noted. “Obviously, Filthy Island is on an island, a beautiful yet affordable location in Hawaii. So you have to find camera crews. You have to find a nice setting.

“You have to find people who will work, who will help you promote the event, people who will wrestle and fight each other on the show. So it’s been quite a difficult undertaking in a lot of ways, but I mean, that’s what I was built for. That’s what I’m here for. I’m here to put on the absolute best show that I can, and that’s what you’re going to see on Wednesday.”

Hausman pointed out that the logo for Filthy Island resembles an octagon and asked if the matches will be fought inside a cage. Lawlor said they won’t and that the fighting will occur without ropes on the beach.

“There’s definitely not an octagon,” Lawlor assured. “I don’t care how many sides are there. It’s not an octagon. This is a different environment I would say. Based on a lot of the happenings over the past few weeks, I’ve had to switch course in some ways, and we have decided that in order to not cut costs but change things up, the environment on Filthy Island will have no ropes, [fighting] on the beach, the beautiful beaches of Hawaii.”

While Filthy Island will be held in Hawaii, the home of The Von Erichs, Lawlor stated that they are not invited to the event. However, he said that Lance and Rick Von Erich are allowed be at the event.

“We’re not doing this in their backyard, as much as they wish that we would and actually bring some prestige and wrestling talent to that compound,” Lawlor revealed. “We’re not hosting it in their backyard. The Von Erichs are NOT invited. I want to make that quite clear. Ross, Marshall [and] Kevin, none of them are invited. I don’t want anyone from that family there. Lance and Rick are the only ones that I would possibly allow to step foot back anywhere near me and step foot on Filthy Island.”

Lawlor noted that Hawaii was chosen because of the tropical setting and the luxurious accommodations. He promised Filthy Island will deliver the best action possible.

“Listen, we chose Hawaii because it offers the best of many worlds,” Lawlor stated. “It offers a tropical setting where you can have some of the most absolute luxurious, great accommodations side-by-side with some less desirable but, like I said, more affordable locations.

“Filthy Island is about bringing the best action through as many people and types of people as possible. That’s why we’re worldwide. The show’s going to be everywhere, DAZN, YouTube, Roku [and] Fubo. It’s gonna be everywhere. We want to get as many eyes as possible on this, and we thought that Hawaii was the absolute best spot to do so.”

Hausman and Lawlor spoke before MLW made more match announcements for Filthy Island. However, Lawlor confirmed on the podcast that Low Ki vs. King Mo will be the main event of Filthy Island.

“That’s right, but you know what Nate (Nick), I like you a lot, and I’m gonna give you some more information on Filthy Island after we talk about this main event between Low Ki and King Mo,” Lawlor confirmed. “Low Ki, or as King Mo like to call him ‘Low IQ’, he’s looking for a measure of revenge against King Mo you could say since King Mo knocked him out in the first King of the Knockouts match, and Lo Ki’s been having a hard time getting sanctioned by the athletic committees.

“They don’t want to clear him due to the trauma that King Mo put on him, but virtually anything goes, so we got this match signed, sealed and delivered baby! Are you kidding me? This is a phenomenal main event! The King of the Knockouts 2! King Mo taking on Low Ki, the Opera Cup runner-up.”

Lawlor noted that King Mo only has an affiliation with Team Filthy. However, he praised King Mo for his skills especially his highlight of knocking out Low Ki at King of the Knockouts 2.

“We have an association with King Mo,” Lawlor noted. Look at his track record, King Mo, he knocked out Low Ki. That’s something that not a lot of people can say that they did. I mean, I’ve beaten the guy a handful of the times but not very many other people have. King Mo, he’s one of those guys. What else can I say?”

Lawlor also talked about the other matches that will be on Filthy Island, including Dominic Garrini going up against the unknown Mauna Loa.

“There’s been a lot of rumors, a lot of people saying that ‘Filthy’ Tom caused the Von Erichs to lose the tag titles. Allegedly, there was a Team Filthy attack on ACH, allegedly I want add one more time,” Lawlor said. “We’ve had sponsors pull out. It’s been kind of tough. People think that because we’re hosting the show in Hawaii and that is the home, I guess, of the Von Erichs. They can’t pick between there or Texas, but that’s one of their homes in Hawaii.

“A lot of the people there on the island don’t want us there, not true! Not true because Dominic Garrini is going to be in action on this show and I am here to tell you who his opponent is. Dominic’s opponent, facing International gold medalist in BJJ Dominic Garrini, will be none other than 14-time Polynesian Pacific Champion Mauna Loa. We are bringing in the best fighting styles from around the world. You mentioned Dominic Garrini. We got Mauna Loa. You mentioned Kevin Ku earlier.

“I have extended the olive branch to some other international competitors. After his great showing, I have asked — his great showing in the Opera Cup where I defeated him. I have asked the young upstart Rocky Romero if he would like to join in on Filthy Island. There’s a $10,000 purse to the winners, and I’ve also asked another international competitor from a different fighting style, Zenshi. We’ll see if he takes the bait, I mean, comes in and competes.”

Hausman noted that in the announcement of Filthy Island, a disclaimer was presented that stated “Filthy Island is a fraudulent business venture. Wrestlers and fans take 100% risk journeying to Filthy Island.” This led Hausman to wonder if Filthy Island was created as a means for Lawlor to hunt people.

“No, no, no no but it’s funny that you mention that because that’s not going to happen on Filthy Island,” Lawlor assured. “But I’m going to give you the biggest scoop of the evening. You ready? Filthy Island will come from two separate locations.

“That’s right. Not only, not only will Filthy Island come to you from the beautiful island of Hawaii but also live from the Jungles of Mexico as we will have an Aztec Jungle Fight between Savio Vega and Mil Muertes. First time promoter, look what I can bring to you.”

Lawlor’s full interview aired as part of today’s episode of our podcast, The Wrestling Inc. Daily. Subscribe to get the latest episodes as soon as it’s released Monday – Friday afternoon by clicking here. You can find the full audio, as well as the video from Nick’s interview with Lawlor, below.