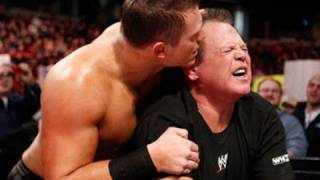 On Feb. 20, 2011, WWE Hall of Famer Jerry “The King” Lawler challenged The Miz for the WWE Championship at Elimination Chamber 2011. A little over 10 years later, The Miz is once again champion and Lawler is ready for his rematch against The A Lister.

Lawler tweeted, “Almost ten years ago, to the day, at #eliminationchamber2011 I wrestled @mikethemiz for the @WWE Title…I think it’s time for the rematch.”

During that match a decade ago, Lawler hit his patented Diving Fist Drop on The Miz but the champ placed his foot on the bottom rope to void the pinfall. The Miz then performed a Skull Crushing Finale on Lawler to retain his title.

Earlier tonight, The Miz shocked the world by cashing in his Money in the Bank contract on Drew McIntyre to begin his second reign as WWE Champion.

As noted, The Miz sent out a strong message to his doubters, especially Internet fans, after capturing the title.

Almost ten years ago, to the day, at #eliminationchamber2011 I wrestled @mikethemiz for the @WWE Title…I think it's time for the rematch https://t.co/fl9qhk8v3X