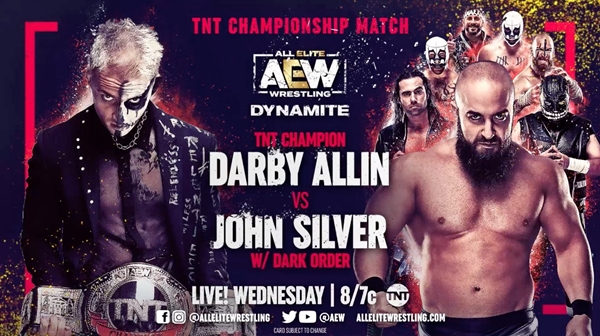 Tonight’s show saw Silver challenge Allin for his TNT Title in the main event. The match went for about 15 minutes, and concluded with the Relentless One picking up the 1-2-3 after hitting a Canadian Destroyer. After Dynamite went off the air, Sting took to the mic to congratulate Darby on his victory, while also emphasizing matches like that are the reason why AEW “is the place to be.”

Darby then took the mic to give props to his opponent.

“I don’t think anybody here knows, but I’m pretty sure you dislocated your shoulder about halfway through that match,” Allin said. “But g*ddamn, did you put everything into it! And I’m down to do it anytime again. Thank you, John. Thank you.”

As seen in the gif below, there was a point in the match when Silver went over the barricade and landed awkwardly.

You can see fan footage of the off-screen promo below:

Sting and Darby talk to the crowd and Darby thanks @SilverNumber1 who dislocated husband shoulder apparently! #AEWDynamite pic.twitter.com/jHVdzUlQPR

After Dynamite, Darby Allin said he was "pretty sure Silver dislocated his shoulder" during the match. Possibly happened here when Silver went over the barricade. pic.twitter.com/QFiiiI8dia