Murphy took to Instagram this afternoon with storyline comments on why he has turned back heel again, but those comments have since been deleted.

Last Friday’s SmackDown featured a backstage segment where Murphy approached Seth Rollins why he was with Kayla Braxton, talking about the recent Cesaro Swing he took. Rollins just looked over at Murphy, then stared back straight ahead. Murphy said he was thinking that he could assist Rollins with the Cesaro situation, but Rollins told him to get out of his sight, and do it now. Murphy then walked off. Murphy later lost to Cesaro in singles action, while Rollins was on commentary.

The WWE Instagram account posted a photo from the Rollins – Murphy backstage segment earlier today and Murphy responded in the comments section. He went on and explained why he’s turned heel again, blaming it on The Mysterio Family for how they used him.

“Let’s point out the obvious! The Mysterio’s used me! I never needed them! I’m beyond one of the most talent in-ring performers on the planet! Aalyah used me to be on tv and advance an acting career. Dominik used me so he had a reason to stand ringside. Rey was jealous that I became the new face of the cruiserweight and he was left out of the discussion. They took what they wanted then they left me in the shadows! Sounds like my time in NXT,” Murphy wrote.

The comments have since been deleted.

Murphy and Rollins spent several months feuding with Rey Mysterio and Dominik Mysterio last year before Murphy turned on Rollins and joined The Mysterios, beginning a romantic relationship with Aalyah Mysterio in the storylines. The storyline was seemingly dropped for no reason back in late November as Rollins took time off to be with Becky Lynch to prepare for the arrival of their first child together.

Until last week’s loss to Cesaro, Murphy had not wrestled since losing to King Baron Corbin on the December 4 SmackDown. Rollins returned to SmackDown in February and Murphy did appear with the rest of the roster during Rollins’ return promo, but he was never acknowledged, which was significant because of the history they had before Rollins took time off. The backstage segment on SmackDown last week was the first interaction between Murphy and Rollins since last year.

There’s no word on what WWE has planned for Murphy and Rollins, but it’s believed that Rollins vs. Cesaro will take place at WWE Fastlane or WrestleMania 37.

Stay tuned for more. You can see Murphy’s deleted comment below: 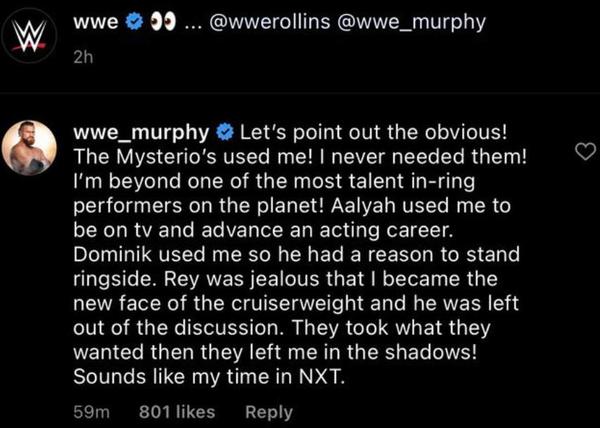