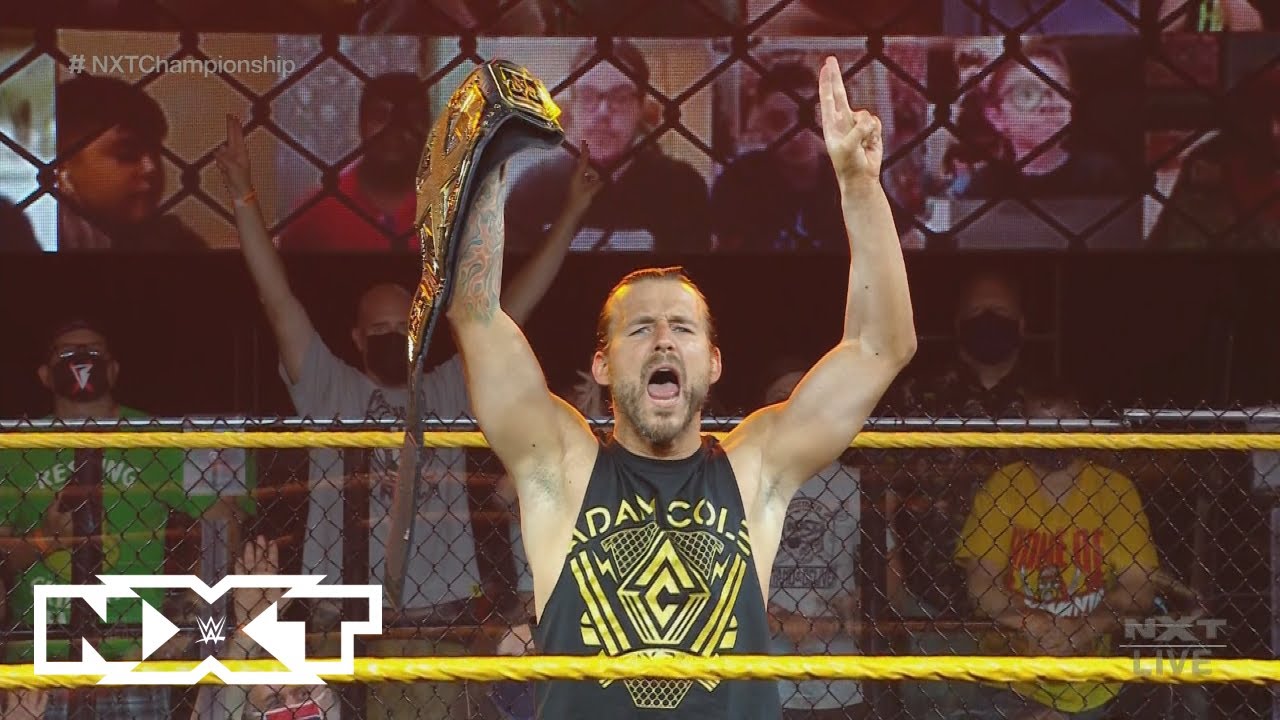 Standing tall with the NXT Championship on Tuesday, Adam Cole may be foreshadowing what’s ahead come NXT TakeOver: In Your House this Sunday, as Karrion Kross defends his title against Cole, Pete Dunne, Kyle O’Reilly and Johnny Gargano in a Fatal 5-Way Match.

Just before his big matchup, Cole spoke with the panel on WWE’s The Bump about his upcoming match and his blueprint plan heading into the main event this Sunday. But first, the panel and Cole discuss the groundbreaking promo he cut on Kross last week and what urged him to call the champion out.

“I wanted to get that off my chest for a really long time. Truth be told: I think the reason that stuck with so many people and why that was so powerful is because it’s true, and they know it’s true,” Adam Cole stated. “Nobody has talked to Kross like that before. Nobody has had the guts to say that to Kross’ face. I did. I’m Adam Cole ‘Bay-Bay,’ and he’s not.”

Giving credit where credit is due, Cole admits that Kross is a great champion; however, Cole believes Kross doesn’t come anywhere near the reign and legacy he has had with the title in the past.

“I do think Kross is pretty good. If he was terrible, he wouldn’t be the NXT Champion,” Cole mentioned. “However, I do think he has been given every single platform to succeed. Again, that’s what I meant by the cool music, the girl, and the awesome lights and the smoke machine. NXT has done everything to make Kross feel like one in a million and as special as possible. The problem is when the bell rings, he could never touch somebody like me.

“I had to start from the ground up and work my way to become the longest-reigning NXT Champion of all time. A guy like Adam Cole shouldn’t, on paper, be someone who is the NXT Champion for 403 days, but I was. I let every single scenario I’ve been in and every opportunity I got, I knocked it out of the park, and I exceeded expectations.”

During his interview, Cole admitted that he wishes this match on Sunday was just him against Kross. But now, he welcomes the competition, including his former friend turned rival as of late, Kyle O’Reilly.

“Yes. I think Kross has tricked people into thinking that he’s tougher or more of a fighting champion by saying, ‘I want to fight all four guys.’ Of course, he does. That’s very ideal for him. Like I said, and I stand by this, the idea of Kross having to go live on a TakeOver against me, knowing how I feel about him, [he’s] terrified thinking. ‘My, God, Adam Cole is going to run circles around me,’ because he knows that’s what will happen; this is easier for him [to have a Fatal 5-Way] in some ways. By easier, I mean the embarrassment of having to go one-on-one with Adam Cole,” Cole answered confidently.

“Of course, there is a part of me that wishes it was a one-on-one match, but this is the situation I’m in. I’m getting the chance again to fight for the most precious prize to me in all of WWE. If that means it’s a one-on-one with Kross or a Fatal 5-Way at TakeOver: In Your House, it doesn’t matter because I can’t be touched right now.”

With a lot at stake this Sunday, Cole is willing to put his animosity aside with O’Reilly during the match and focus on becoming the new and two-time NXT Champion. He vows to make history again and take his rightful place back atop the black-and-gold mountain.

“The hatred that I’ve had for Kyle O’Reilly is one of my strongest emotions. The disdain that I have for Karrion Kross and the disappointment of his NXT Championship reign is strong. But you know what emotion is the strongest? It’s regaining the NXT Championship,” Cole concluded. “That’s on the forefront of my mind. That is my focus, and that’s what I’m walking into TakeOver to do. If I can hurt Kyle in the process, great! If I can embarrass Karrion Kross in the process, great! But the most important thing to me is regaining the NXT Championship back. Nothing can top that.”

You can watch Adam Cole’s full interview here. If you use any of the quotes in this article, please credit WWE’s The Bump with a h/t to Wrestling Inc. for the transcription.