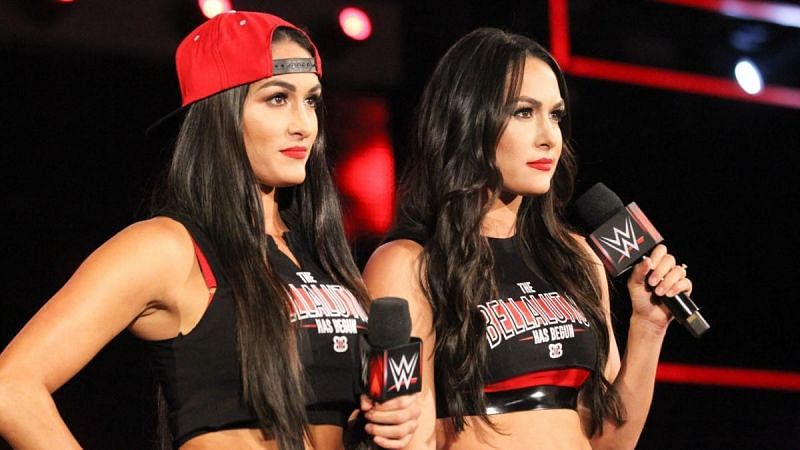 The Bella Twins are preparing for an in-ring return.

The sister duo have expressed heavy interest in getting back inside the squared circle for just about a year, and even got a little physical at April’s WrestleMania. Now that both Nikki and Brie have given birth and been mothers for a little while, conversations about a return to wrestling have resurfaced.

Speaking with Entertainment Tonight, Brie Bella emphasized that a certain title is what peaks her and her sister’s interest in getting back in the ring.

“The one thing is that WWE brought the Women’s Tag Team Titles in,” Brie said. “We were like, ‘Wait a second, how do the Bellas not have this on the résumé?’ It’s tempting because we would love to go fight for the tag titles because that’s what we’ve always been: a tag team.”

Beyond the temptations of gold, Brie recounted a specific in-ring memory that she wants to rekindle with her children in the crowd.

“Now that Birdie is four, and we talking about when the boys get a little older too, to have your kids watch what we used to do in that ring would be really special for us,” Brie said. “I’ll never forget the moment when I wrestled Stephanie [McMahon] at Summer Slam. To see her three little girls, they were little at the time, to see their faces when we came back. They looked at their mom like she was a superhero. I want that one day. I just thought that was the coolest thing.”

AJ Styles once used the t-shirt tagline “never rest, never rust.” Nikki seems to be taking that approach to wrestling again, as the longest-reigning Divas Champion confirmed she is already training.

“For me, I’m definitely starting that preparation,” Nikki said. “I want to train hard for it. When we come back, I want to change my style in the ring a little bit. I want to make a statement.”

As for the next generation of Bellas, Brie says sees the squared circle in her son Buddy’s future.

“Buddy is a wrestler in the making,” Brie said. “He’s so strong. Sometimes when you change his diaper, he’ll put an arm bar on you. It makes Bryan so proud. ‘He already knows how to do an arm bar! It’s in his blood.'”

Nikki says her son Mateo leans on the side of his father, professional dancer Artem Chigvintsev.

“My guess is Mateo is going to be a dancer and a soccer player,” Nikki said. “He has fast feet, he moves his feet a lot, he points his toes perfectly. He hasn’t really shown me the aggressive wrestling feels yet, but personality wise he can be very stubborn.”

Regardless, Brie notes that there is precedence to mix wrestling with dancing.

“In wrestling there’s Fandango,” Brie noted. “That could be a tag team.”

While most retired wrestlers will leave their in-ring futures as “we’ll see” and “never say never,” Brie affirmatively declared their position on a return: “The Bellas are definitely going to make a comeback. We don’t know exactly when, but we said that we have one more run in us.”

If you use any quotes from this article, please credit Entertainment Tonight with an h/t to Wrestling Inc. for the transcription.

Previous
AOP Reacts To Retirement News, Says They Aren’t “Done Yet”
Next
Aleister Black On What Paul Heyman Said After His WWE Release, Who He Wants To Work With