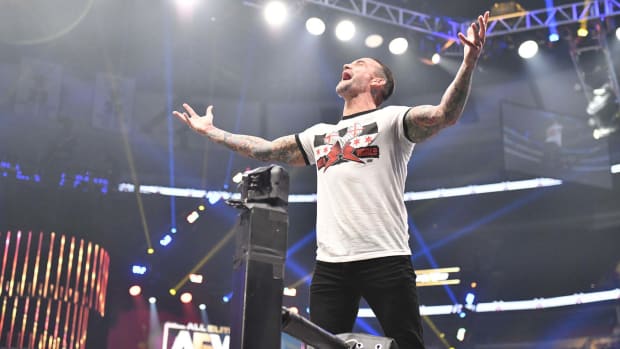 CM Punk and AEW President Tony Khan participated in the AEW Rampage: The First Dance media scrum after the show to take questions from members of the press.

Wrestling Inc. Managing Editor Nick Hausman kicked off the scrum with the first question, asking about Punk’s contract status. The former WWE Champion is signed to AEW, but the duration of his deal remains unknown.

“I don’t really know if you want to know how the sausage is made. I think one of the biggest appeals of AEW is everybody here looks like they show up to have a good time. You don’t want to know the details of my contract,” Punk said. “Just know that I’m here. It’s not a part time thing, and I’m here to have fun and to help, if anybody wants help.”

Punk then asked Khan if he wanted specificity, but Khan declined.

“We’re going to be doing this for a while,” Khan added. “This is exciting. This isn’t a short-term thing or a part-time thing. This is like, full-time. We’re very excited.”

Beyond dream match-ups and scheduling plans, Punk’s relationship with the forbidden door was a hot topic. Regardless of the possibilities down the line, Punk certified that before anything else, he’s “an AEW guy.”

“Listen guys, I just came back! You’re trying to book me on all these different territories already,” Punk said.

Punk then revealed that he can still work his outside ventures while under AEW contract, and added that AEW’s deep roster means there might not be room for him on television every week anyways.

“I have freedom here to continue to do my outside endeavors, like my commentary with CFFC. The schedule here enables me not only scheduling-wise but also main event talent-wise. I don’t have to be on every show, the way now Omega and the Bucks aren’t on every show,” Punk said. “The talent roster is so deep. Give people time off if their wife’s having a baby. To me, that’s a novel concept that should be embraced. Really, credit to this guy (motions to Tony Khan) for allowing stuff like that to happen.”

While Punk is first and foremost concerned with AEW, he’s open to crossing the forbidden door down the line. Punk noted that his pro wrestling moves are now ultimately in Khan’s hands.

“I think [Tony] gets pull position regarding things I do. If he tells me he wants me to go be in the G1, we’ll talk about it, but I’m here to be an AEW guy. I’m here to be a TNT guy.”

Khan pointed out that NJPW’s G1 Climax would be “a lot of matches,” which got a chuckle out of Punk.

Punk did praise Khan’s work with opening the forbidden door in the first place, and teased “fitting into that” sometime later, but once again doubled down on his current priorities.

“I think it’s great. Forbidden door, working with TNA, Impact, all these other things. Maybe somewhere down the line I’ll fit into that, but right now like I said, I just jumped into this pool. Let me swim in this pool before we get out, top off, go to the sauna, or whatnot. I’m an AEW guy.”

If you use any quotes in this article, please credit AEW with an h/t to Wrestling Inc. for the transcription.