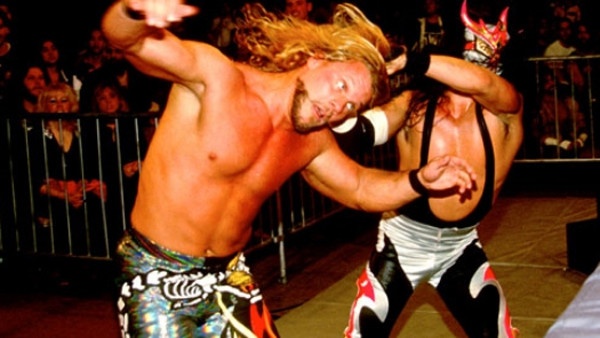 Juventud Guerrera made his AEW debut tonight in a match against Chris Jericho.

Announced last week as the third ‘Labor of Jericho’ by MJF, Guerrera controlled most of the match. His offense was primarily on the ground, landing a plethora of strikes and a swinging neck breaker.

Per the stipulation, Jericho had to win the match with a move from the top rope, which led to the Demo-God attempting a number of high-flying maneuvers throughout the match. Jericho hit a cross-body, an axe-handle, and even reversed a hurricanrana into a Walls of Jericho, but ultimately got the “W” with a top rope Judas Effect.

This was Guerrera’s first match on TNT in over 15 years. The Juice competed regularly on WCW, where he had feuds against the likes of Rey Mysterio, Ultimo Dragon, and Jericho himself.

After the bell, Wardlow attacked both Juventud and Jericho. MJF proceeded to announce that Wardlow would be Jericho’s next opponent, and MJF himself will be ringside instead of on commentary. If Jericho wins, he will get his singles match with MJF as his fifth labor.

Stay tuned to Wrestling Inc. for live AEW Dynamite coverage throughout the night!

You can see highlights from the match below:

SUPER JUDAS EFFECT for the win!

Tune in to @tntdrama NOW to watch #AEWDynamite Homecoming! pic.twitter.com/UguZvE7O55

JUVI DRIVER! But @IAmJericho kicks out and @The_MJF is livid!

Tune in to @tntdrama NOW to watch #AEWDynamite Homecoming! pic.twitter.com/XY8TtvSDd3

Nice backbreaker from @IAmJericho, but he has to win with a top rope move.

Tune in to @tntdrama NOW to watch #AEWDynamite Homecoming! pic.twitter.com/gSxEkxNgRl