The sheet shows that Punk was originally scheduled to face Triple H. The paper indicates that Punk vs. Triple H was still the plan as of January 20, 2014.

Punk did not work WrestleMania 30 and Triple H faced Daniel Bryan in the second match of the night, with the winner going on to face then-WWE World Heavyweight Champion Randy Orton and Batista in a Triple Threat main event. This is the big match where Bryan finally won the title by submission.

Punk’s issues with WWE started getting out in early 2014 and he would end up legitimately walking out of the company at RAW, telling Triple H and Vince McMahon that he was going home. These issues between Punk and the company would continue until later that year as he officially left the company, leading to the infamous “Art of Wrestling” podcast with Colt Cabana.

Punk noted on his Instagram Story that he had been doing some spring cleaning when he found the paper. He joked that he also bound the bone chips that were removed from his elbow in 2010 by Dr. Andrews. The line-up also shows that Bryan was originally scheduled to face Sheamus, and that Roman Reigns was to face Dean Ambrose for the WWE United States Title. Kane was originally scheduled to face Big Show, but that match didn’t happen as The Shield faced Kane and WWE Hall of Famers The New Age Outlaws in six-man action. Big Show participated in the inaugural Andre the Giant Memorial Battle Royal instead. Cesaro last eliminated Show to win that match.

Punk did a Comic Con Q&A back in August 2013 and talked about who his ideal WrestleMania 30 opponents were.

As noted earlier this week at this link, Bryan told an interviewer that he’s disappointed he never got to face Punk in a WrestleMania match, and he hopes Punk returns to a WWE ring.

There were a lot of rumors on Bryan’s WrestleMania main event spot being decided on since SummerSlam 2013, and that most of the controversy was just one big work. This paper says otherwise.

Below is a look at the internal card as of January 20, 2014, and what the card ended up being, along with Punk’s screenshot:

* The Undertaker vs. Brock Lesnar

FINAL CARD AFTER THE SHOW:

* The Shield defeated Kane and The New Age Outlaws 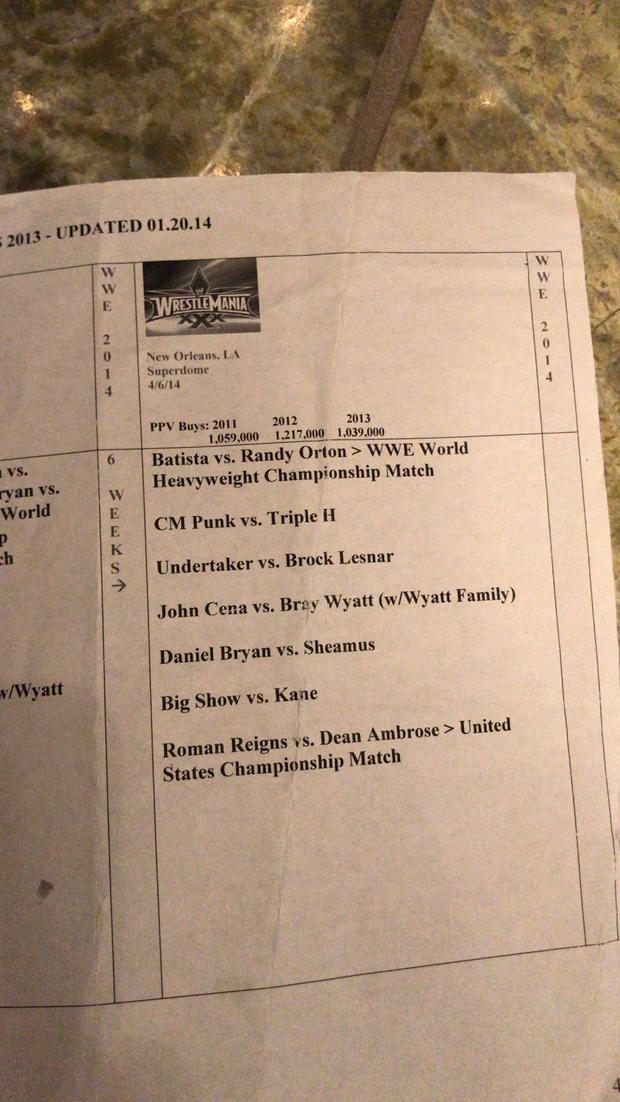