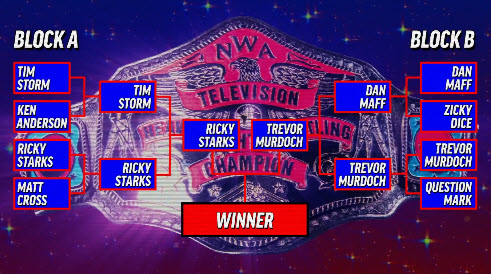 James Storm and Eli Drake defeated the legendary Rock 'N' Roll Express to capture the NWA World Tag Team Titles, to begin their first reign together. Counting his reigns back during the NWA TNA days, Storm is now an eight-time NWA World Tag Team Champion. Ricky Morton and Robert Gibson began their run with the titles back on the December 3 episode of NWA Power, by defeating The Wild Cards.

A new NWA World Women's Champion was also crowned as Thunder Rosa defeated Allysin Kay. This is Rosa's first run with the title. Kay won the vacant strap back on April 29 by defeating Santana Garrett at the 2019 Crockett Cup event.

The main event of Hard Times saw Ricky Starks defeat Trevor Murdoch to become the new NWA Television Champion in the finals of a tournament. Starks also defeated Matt Cross and Tim Storm in the one-night tournament, while Murdoch defeated Question Mark and Dan Maff to make it to the finals. NWA announced back in mid-December that the TV Title would be re-introduced.

Below are a few shots from Friday's title changes at Hard Times:

It's time for some TAG TEAM TITLE ACTION at #NWAHardTimes!!

Can Rock N Roll continue the dream? They have some tough competition tonight!

Who do you see with the advantage in this match, currently?#NWAHardTimes pic.twitter.com/XjyvIunrh1

Twitter is blowing up sharing congratulations for the new #NWA Women's World Champion. @thunderrosa22 has worked hard to earn her Championship at #NWAHardTimes. pic.twitter.com/47l11G8Bwy

.@starkmanjones has done the impossible!

He went 3 for 3 tonight and is your @nwa Television Champion!#NWAHardTimes

Thank you all for joining us! Goodnight! pic.twitter.com/0aZUjeQ2vD