Wrestling Inc. is still working on details of the arrest, which would be Hart's third arrest this year.

As Wrestling Inc. first reported, Hart was arrested last month on February 12th in Richmond, Virginia. The 40-year old was booked on three charges of possession, possession of a Schedule III controlled substance and possession with intent to sell and distribute. In a now-deleted video, Hart said that he was pulled over by police due to an issue with his license plate not matching the registration for the car he was driving in. Hart said that he was arrested after the police found steroids and marijuana in the car.

Hart was arrested again earlier this month on March 4th for violating his house arrest.

Hart has had his share of legal issues throughout the years. He was arrested in December of 2014 by the Royal Canadian Mounted Police on multiple sexual assault charges involving two women, which were dropped in June of 2016. He was most recently arrested on January 1, 2017 after attempting to evade arrest after being pulled over for a hazardous traffic violation in Arlington, Texas. Those charges were also eventually dropped.

Stay tuned for more updates on Hart's most recent arrest. 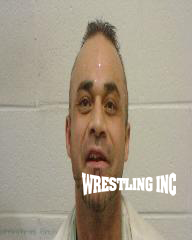 Smokehouse Jones contributed to this article.