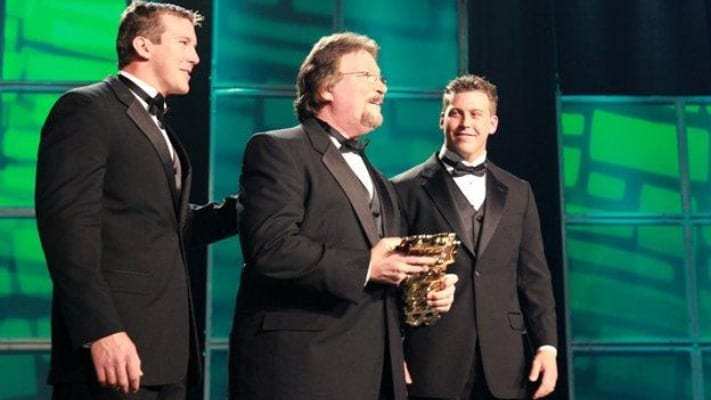 Findings were released this week from an audit into the Mississippi Department of Human Services after several people were arrested back in early February, including former WWE talent Brett DiBiase, according to PWInsider. The scandal was described as one of the largest embezzlement scandals ever in the state, and had direct connections to the DiBiase family.

As noted back in February at this link and this link, DiBiase was among those indicted in the scandal, along with the former director of the Mississippi welfare agency others. It was alleged that Brett was given money to go to a drug treatment facility in Malibu, and that those funds were earmarked for welfare programs in the state. Brett was allegedly given the money as payment for classes that he didn't reach on drug abuse. It was later reported that there was a DiBiase family connection as Heart of David Ministries, the non-profit religious organization ran by WWE Hall of Famer Ted DiBiase Sr., reportedly received more than $2.1 million in welfare from the state over a few years, after Brett had been working for the state. This came after the organization received just $5,000 in grants in 2013, but were paid $271,000 in welfare money, during the same year that Brett was hired to work in the Mississippi Department of Human Services as a senior official. Ted's organization received as much as $900,000 one year.

Ted's Heart of David Ministries spent the full amount it received, which was $2,126,739, from May 2017 through earlier this budget year. Ted was paid $84,517 as president of the organization. In a 2018 contract, Heart of David had pledged to "establish a network of partnerships, services and resources throughout Mississippi communities for faith-based and self activities" but there was no evidence on how all of the money was actually used. While the organization was receiving funds from the state, 98% of welfare requests were being turned down by Mississippi. Heart of David is no longer receiving any funds from the state of Mississippi. In another family connection, it was revealed that the Mississippi Community Education Center paid Bret's brother, former WWE Superstar Ted DiBiase Jr., to provide training to human services employees in late 2018 and early 2019. A woman who answered the door at the home of Ted Jr. in Clinton, MS declined to comment, but did say that the Clarion Ledger, the original newspaper to break the scandal, has done "fictitious" reporting in the past.

The findings report, seen below, noted that the Mississippi Community Education Center (MCEC) and the Family Resource Center of North Mississippi (FRC), two non-profit groups, paid "large sums" to Ted Sr., Ted Jr., and Brett for work that they did not do, for unreasonable travel costs or with little proof that the programs helped the needy.

"MCEC and FRC paid large sums to wrestlers Ted Dibiase, Ted Dibiase, Jr., and Brett Dibiase for work that was not performed, for unreasonable travel costs, or with little proof the programs helped the needy," the report says.

"This audit should be a wake-up call to everyone in government. The old way of doing things, where you do whatever your boss or a person who controls a lot of money tells you to do, or you ignore the law around how to spend money because you think no one is lookingthose days are over," said State Auditor Shad White.

Below is the full press release on the findings of the investigation that was released this week:

JACKSON  Millions of dollars of grants from the Mississippi Department of Human Services (DHS) were misspent, converted to personal use, spent on family members and friends of staffers and grantees, or wasted according to an audit released today by State Auditor Shad White.

"This completed audit of DHS for the previous year shows the most egregious misspending my staff have seen in their careers at the Office of the State Auditor," said White. "When you read this one-hundred-plus page audit, you will see that, if there was a way to misspend money, it seems DHS leadership or their grantees thought of it and tried it."

The audit of DHS came as a part of the Office of the State Auditor's yearly Single Audit of federal money flowing through state agencies.

The audit of DHS showed massive sums were funneled to grantees like the Mississippi Community Education Center (MCEC) and the Family Resource Center of North Mississippi (FRC), two non-profits. Those grantees were given over $98 million in DHS grants over the last three years, mostly from the program Temporary Assistance for Needy Families (TANF).

The audit's formal finding is that over $94 million of that grant money has been "questioned," meaning auditors either saw clear misspending or could not verify the money had been lawfully spent. Examples of questioned spending included:

* MCEC and FRC used TANF money to hire lobbyists with TANF money, which is unallowable, often with no paperwork describing the work the lobbyists were hired to do.

* MCEC and FRC paid large sums to wrestlers Ted Dibiase, Ted Dibiase, Jr., and Brett Dibiase for work that was not performed, for unreasonable travel costs, or with little proof the programs helped the needy.

* MCEC and FRC used TANF money to fund religious concerts with no proof they benefitted the needy.

Among the grantees, MCEC was particularly dependent on TANF funding and engaged in extensive misspending. From 2016 to 2019, MCEC was given over $60 million in grants from DHS, while raising just under $1.6 million from other sources. Examples of questioned spending at MCEC included:

* MCEC paid Victory Sports Foundation TANF money for fitness programs for Mississippi legislators and other elected officials/staffers at no charge.

* MCEC purchased three vehicles with grant funds, each for over $50,000, for Nancy New (Director of MCEC), Zach New, and Jess New. MCEC also paid salaries, cell phone bills, and other costs for a variety of members of the New family.

* MCEC transferred over $6 million to a private school and organization owned by Nancy New and also purchased curricula and supplies with TANF funds for the school.

* MCEC issued a $3,000 check to the bookkeeper of MCEC with a handwritten note saying the payment was actually for John Davis.

* MCEC paid a variety of consultants, including Jess New, for no clear deliverables or where there was no proof the spending met TANF requirements.

* Zach New took a loan out against his MCEC retirement plan and repaid the loan with TANF money.

* MCEC paid excessive rent well above market value to a holding company owned by Zach and Nancy New. Sometimes the rent paid for spaces that were not used for TANF-related purposes.

The unallowable spending was achieved through a variety improper activities, like: DHS Director Davis limiting monitoring of subgrantees; forged documents; subgrantees providing summaries of expenditures that did not match actual expenditures; a limited or nonexistent RFP process for selecting subgrantees; fraudulent accounting entries that misstate actual payees; a failure by DHS staff to report obviously improper transactions to law enforcement; and others.

Auditors have recommended current DHS leadership take steps to remedy these problems. "DHS staff should immediately move to seize any property that was purchased by grantees with taxpayer money, as that property belongs to the taxpayers," said White. "That property does not belong to the Auditor's office, so we cannot do this for them, but it should be marked as DHS property, and DHS should use their legal authority and move quickly to seize it."

The audit also suggested DHS conduct an internal investigation into current and former DHS staff who may have played a role in the fraud.

"Thank you to our team of professional auditors for their incredible work," said White. "The doggedness and attention to detail shown by Stephanie Palmertree, Michael Torres, Jason Ashley, and their team of CPAs led to this critical report. Their work is the first step to restoring public trust in DHS."

While this Single Audit report concluded the Auditor's office's audit of DHS, the criminal investigation of this matter by the Auditor's office and federal authorities continues. "This audit should be a wake-up call to everyone in government. The old way of doing things, where you do whatever your boss or a person who controls a lot of money tells you to do, or you ignore the law around how to spend money because you think no one is lookingthose days are over," said White.