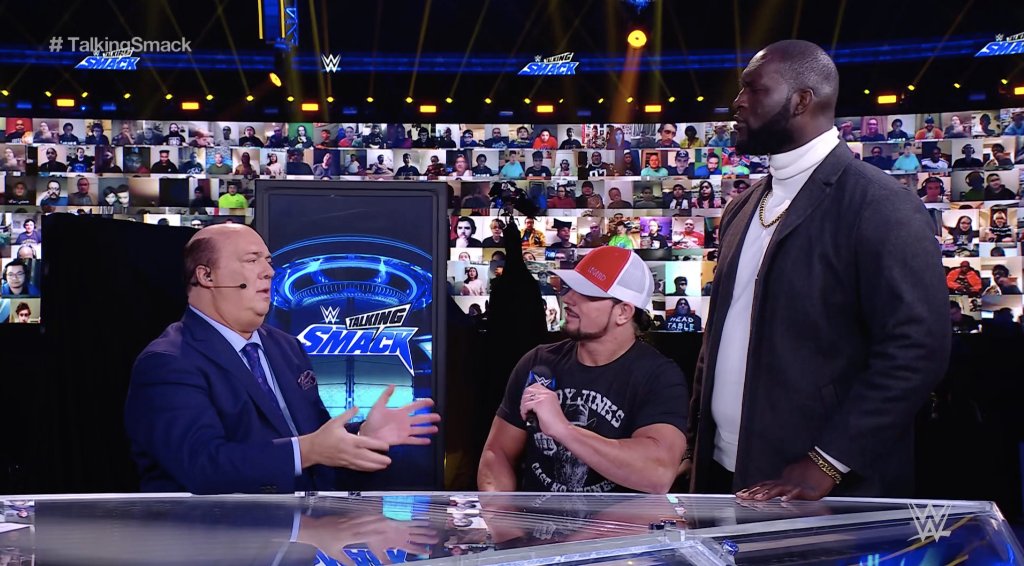 This Sunday, during the Men’s Royal Rumble, AJ Styles would love nothing more than to win the overall match and go on towards the main event at WrestleMania 37. But right now, he is still uncertain if he’d like to make history as a three-time WWE Champion or create his first-ever reign with the Universal Championship. He weighs his options while speaking to panelists Kayla Braxton and Paul Heyman on Talking Smack.

“The Royal Rumble is Sunday, and I’m looking forward to it,” AJ Styles exclaimed. “I’ve got a plan, a good plan. I’ve never won the Royal Rumble before. Now mind you, I’ve only been in two. This one, I will win! And when I do, I will be going after a championship. [It could be] the WWE Championship or the Universal Championship. I have not yet decided. But when I do, I’ll let you know.”

“The Special Counsel” to Roman Reigns, Paul Heyman, gave his take on the possibility of what could happen if Styles decided to reappear on the blue brand for his shot at the Universal Championship. At one point in the interview, Heyman threw his client under the bus when he complimented Styles for being the best in-ring performer of this generation.

“See, that interests me,” Paul Heyman replied. “I have a ventured interest in your answer because you have faced Roman Reigns before, and Roman Reigns has defeated you before. In fact, the impossible mountain for you to climb, sir, has been Roman Reigns … You have been a terror since you’ve been on Monday Night RAW. So, the way I would view this is that if — when — you win the Royal Rumble, you can announce this Monday which one you’re going to go after; Drew McIntyre or Goldberg, whoever wins that match. Or you could wait till Friday and show up on SmackDown…

“I give you my word that this is not a prediction; this is a spoiler: The main event of WrestleMania features Roman Reigns. I would like that match to happen for selfish reasons, sir. You are recognized around the world as the preeminent and the best in-ring performer of this generation. Roman Reigns cannot claim to be the best in-ring performer of this generation until he steps into the ring with AJ Styles and defeats AJ Styles. When AJ Styles wins the Royal Rumble, and the main event is Roman Reigns versus AJ Styles, that’s not just a box office [match], it’s box office platinum.”

After Heyman hyped up what could be one of the main event matches in April, Styles said gunning for the Universal Championship would be a fun chase, but seeing Heyman potentially lose his job over it would be the cherry on top.

“I agree with that! But it’s still my decision,” Styles reiterated. “And I will make that decision either Monday or Friday. Let’s just say I choose to go after the Universal Championship, and I beat Roman Reigns at WrestleMania, and he isn’t at the head of the table or the alpha anymore. What that means, ultimately, is that you would be out of a job. Nothing would make me happier than to see you out of a job.”

You can watch AJ Styles’ full interview on the WWE Network. If you use any of the quotes in this article, please credit Talking Smack with a h/t to Wrestling Inc. for the transcription.