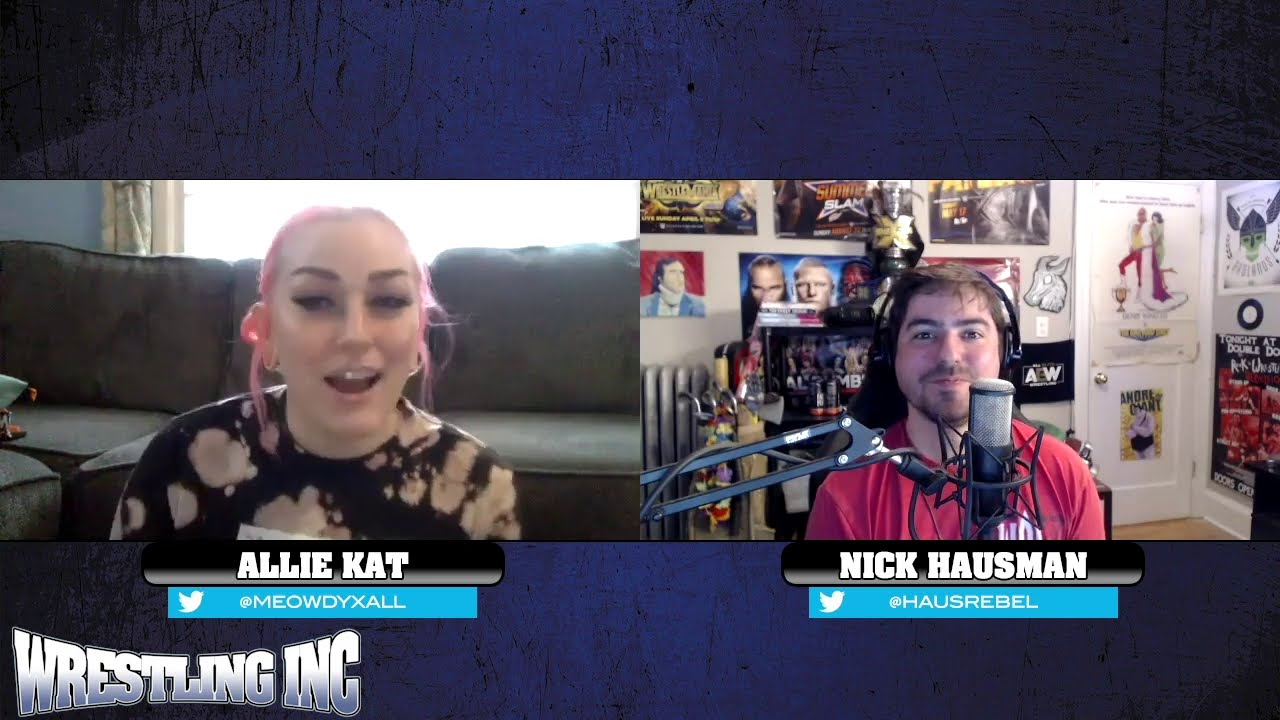 Independent pro wrestling star Allie Kat was on a recent episode of The Wrestling Inc. Daily where she and Wrestling Inc. Managing Editor Nick Hausman discussed her “Real Hot Girl Sh*t” show that was a part of GCW’s “Fight Forever”. She also discussed the origins of her name and how “Allie Kat” was chosen.

“Well, I didn’t choose it. My trainer did,” Kat revealed. “So my trainer is very old school. He wrestled with [Roddy] Piper. All the time he would like to talk about that. So he comes from that era, and everybody at the school had to have a gimmick. You had to be something. So we had an Irish man. We had a cowboy. That’s where I’m coming from. So for me though, it’s like, well, what is she? What can we make her, and my real name is Allison.

“The next week, he comes up to me and goes, ‘Alright girl. Alright, listen. Listen, I have another idea. Tell me, you don’t got to be Allie Kat. What about Allie Kazam?’ And I said, ‘You know what George? Ithink I’m gonna stick with Allie Kat. I think I like that one better,’ and he’s like, ‘Alright girl, I just want to give you options.’ I said, ‘I know. I know. I’m gonna stick with Allie Kat.’ So I have been Allie Kat since practically day one, and it’s just gone from there.”

Kat is synonymous with other current top indie stars like Warhorse, Effy and Dan The Dad. She talked about their close friendship and the bond that many indie stars share that differs from the old school mentality of “everyone is your enemy.”

“The last three or four shows we’ve been on, we’ve been in the same room together,” Kat noted. “Me and Effy, I’ve known — all these, our little character group of me, Warhorse, Danhausen, Effy and Dan The Dad, it’s funny because we’ve all known each other for the last like three years probably, but it’s just this last year everybody kind of blew up. I’ll be like, ‘Hey, remember when you were so and so and nobody cared about us?’ But me and Effy, we tag now, and that just was thrown together, but I think it’s sort of catching on. We’re ‘Bussy’.

“We just actually had a match, and that’s going to air in March for the Cassandro Cup. At the last GCW show, we tagged against CTE (Crazy Tough Enemies), got our asses beat, but it’s still fun. I love getting to hang out with Effy and talk about wrestling and not wrestling and just our normal lives. All the time, he’s like, ‘Allie, come on girl. Come to Atlanta. I just looked up tickets. They are $70 girl. When are you coming out here?’ I’m like, ‘B**ch, I have a job.’ I don’t just stream on Twitch. I can’t just come out there, but I’m sure I will.

“We’re all very like supportive of each other. We try to be positive and be like, ‘Oh like what are you doing? Oh, you’ve got this shirt dropping. Okay, let me like retweet that for you.’ When I first got into wrestling, you always heard stories of like, ‘None of these people are your friends. You can’t trust anybody,’ and now I’m like, ‘Are you sure?’ Because I feel like I’ve got a nice group of people around me all the time.”

Kat then discussed the change in the wrestling locker room environment. She said that the mentality now is that everyone works together and gets along because if they do, they are able to make more money and everyone is more happy.

In late October, ROH announced that they had signed Danhausen. Kat gave her thoughts on Danhausen in ROH and the potential stories that they can tell with him.

“Again, we’re all like, ‘Holy s**t, that’s crazy! We’re stoked,'” Kat expressed. “I like it because Ring of Honor’s the wrestle thing, and that’s where all the wrestle wrestlers are. I feel it’s cool to have somebody like Danhausen there, and it shows you, okay, Danhausen is not Mr. Five Different Wrist Lock Holds. Danhausen is Danhausen, and for him to be at Ring of Honor, which if you go back and you look, there was [El] Generico.

“They had fun stuff. People had fun and also wrestled. So I feel like putting Danhausen on ROH reminds everyone wrestlers can wrestle but also still have fun, and it’s fun to juxtapose him against the pure wrestlers like [Jonathan] Gresham and all them. So one day maybe when they meet, it’ll be this big thing. I think it’s cool to have different types on all platforms.”

Hausman brought up Women Of Honor, and that led Kat to talk about Session Moth Martina who signed with ROH in 2019. She expressed her hope that she gets featured more in future WOH content.

“Women of Honor has Session Moth. Session is signed there, and she is hilarious,” Kat noted. “And she is so cool and funny and entertaining. Before Danhausen was even signed, when she got signed, I was like, ‘Yes, thank you! Show her off!’ You want to get people to watch, this is what you’re going to do, and then they’re going to stay for all the fancy, wrestling and all the workrate stuff too.

“That’s how it works for me. Women of Honor is cool. Probably right now, it’s hard. I get it, but I know I’ve seen at the recent taping, there were girls there. So I’m excited that Ring of Honor will start putting out women’s content again.”

Allie Kat presented Real Hot Girl Sh*t as part of GCW’s Fight Forever. The 24-hour pro wrestling event is available for free on replay via FITE and fans can donate to the wrestlers involved by clicking HERE.

Allie’s full interview aired as part of a recent episode of our podcast, The Wrestling Inc. Daily. Subscribe to get the latest episodes as soon as it’s released Monday – Friday afternoon by clicking here. You can find the full interview from the Daily via the embedded player below: