Former WWE Writer On Which Wrestling Storyline Deserves An Emmy 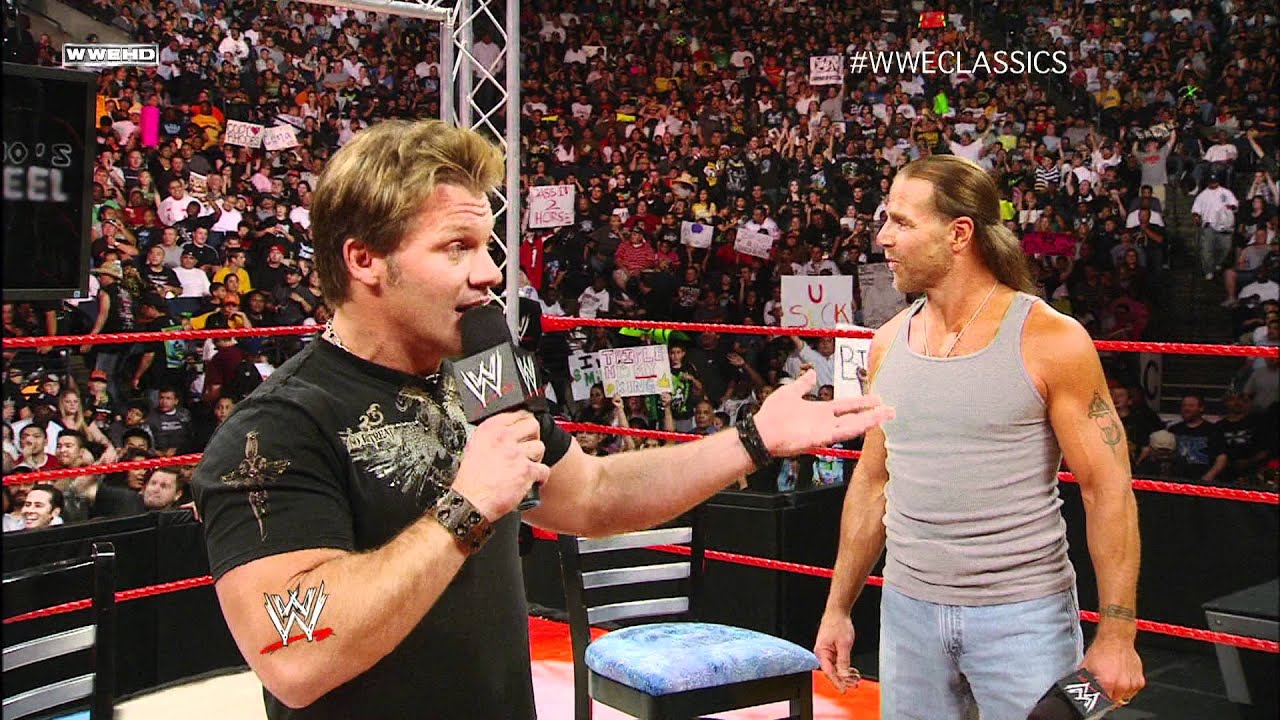 Former WWE writer and co-executive producer of “Young Rock” Brian Gewirtz was on a recent episode of The Masked Man Show with David Shoemaker and Kazeem Famuyide. Gewirtz was asked which storyline he wrote he thinks is deserving of an Emmy nomination, and he chose Chris Jericho and Shawn Michaels’ feud in 2007 – 2008.

“I mean without question, Hornswoggle as the general manager of RAW would have to be the Emmy that would be displayed on the Billboards of Los Angeles everywhere ‘for your consideration’,” Gewirtz joked. “I’ve always been really proud of the Jericho – Shawn Michaels year-long, practically, angle that we did when Jericho was transitioning, in terms of his character, as far as this begrudge suit-wearing hell.

“As always, as you guys know, when a hell is, technically speaking, absolutely correct in what they’re saying and are just displaying their disgust and everything in a way that rubs people the wrong way, that’s it’s always magic because you can’t deny it. You see their side and yet you still cheer for them to get their ass kicked anyway. And to be truthful, I was never really a Shawn Michaels guy going in. As a fan, I always rooted for Bret [Hart] and The Nation vs. DX and all that kind of stuff. Shawn was away when I first started. It took a little while to break the ice.”

“So to be able to tap into that and work with him and then actually really get along with him well as well Chris and basically sit down with this canvas,” Gewirtz described. “As you guys know, the magic is not when you hand someone a piece of paper. That’s the worst version of it, I think, is when you’re just giving someone ‘uh, Vince approved it. You got to do it,’ and the wrestlers, they all hate that.

“We all know that, but when you actually have time to sit down with talents and basically chart something out and get their input — some days I would write almost everything and hand it to them, and they’d be like, ‘Wow, this is actually really good. We’ll just make a few tweaks, and we’re good to go.’ And then some days, everything that poured out of their heads, we just transcribed onto the paper, and it was coming from them 100%.

“It was just that great mix when you have that trust and respect that produces magic, especially when you’re not like, ‘Got to get this approved and got to make sure that everyone’s happy because the person didn’t have input.’ When all three have input, it’s great, and they all knocked it out of the park. Maybe not the writing but even for acting, I think Chris and Shawn deserve some accolades for that.”

Gewirtz worked at WWE for over a decade, and some of the wrestlers he worked with before are still working now, most notably Edge and Christian who made big news at this year’s Royal Rumble with Edge winning The Rumble, and Christian making his in-ring return. Gewirtz talked about what it’s like to see Edge and Christian still going in the business.

“It’s weird and wonderful, especially in the case of Adam and Jay, Edge and Christian, who were told point blank you’re never going to do this again,” Gewirtz pointed out. “The livelihood, the things you’ve done all your life since you were teenagers is over, and now to see them and not only see them, they’re not there collecting a paycheck. None of the guys.

“Obviously thrilled Christian came back for the Royal Rumble, and we’ll see where he goes, especially it always hurt me that he never really got a proper goodbye when he did leave, but to see Edge and to see him essentially become such a promo master now in terms of delivery, and psychology and everything else associated with his character, that makes me really really happy for him and beam with pride too.”

Gewirtz elaborated recalling debates over if Edge and Christian could get over with their comedic characters. He pointed out that you’re never your character forever, and there is always room for change and development.

“When I started there — and yeah, it is a little jarring to see people that you could even consider contemporaries in terms of age and everything else. Myself, Edge and Christian were all born in the same year,” Gewirtz noted. “It was a big debate back in the day because we kind of all bonded. We’re all the same age, kind of the same comic sensibilities. I used to go to the Village to buy their sunglasses for them because I lived in Gramercy Park, and we’d just take a walk down there and expense it, maybe buy one for myself, but regardless, we had a debate.

“I remember the beginning with a lot of the people there as far as the classic ‘does funny equal money’ debate, as far as Edge and Christian. Are they ever going to grow if they’re going to be doing this schtick forever, and to me, it was well, wait a second, a year ago, they weren’t even talking. They were just having ‘great matches,’ and they were great matches, but if you asked a kid on the street imitate Edge or imitate Christian, they won’t know what to do. They’re the guys next to Gangrel watching him spit blood out of his goblet.

“So the fact that they have personas now, that’s great. Obviously, I did not have the hindsight and knowledge nor the maturity to make this argument very cohesive. I think it was more like, ‘But they’re good!’ But in a sense, our argument was, no one’s saying they’re going to be this forever. Let’s them grow, give them the confidence on the mic, and you saw that with Edge.”

Gewirtz continued charting Edge’s character development over the years. He compared Edge to legendary musician Dave Grohl, and he noted that wrestling is the only sport where a 47-year-old star can come back on top.

“To go from Silent Rage, the mute vampire to kind of this wiseass to, I know I’m probably skipping over a few things but, essentially to become the Rated-R Superstar and just be this all out, vile hell villain, and then to become this elder statesman. I mentioned it on Twitter, he really is, he reminds me of the Dave Grohl of WWE,” Gewirtz described. “Everybody loves him. He can funny and serious. I think they’re actually friends in real life, which is cool. He’s got long hair.

“You reach this point now where he could do anything, and you could transition from The Edge and Christian show on WWE Network, where they did some of the goofiest stuff in the world, to still being taken seriously because that’s what happens when you’re a three-dimensional person and not just playing a one-dimensional character. So it’s awesome to see that.

“Wrestling is really the only, I’m going to say sport again, but it’s really the only sport in the sense of a 47 year old can come back on top. It doesn’t really happen anywhere else in baseball, basketball [and] football. You can’t really do that, but in wrestling, here comes Goldberg. Here comes Edge. If The Rock decided to compete tomorrow in the main event, no one would bat an eyelash. That would be completely acceptable. Triple H too. Obviously, Undertaker after all these years. It’s awesome to see. I love it.”

The topic of generational stars came up on the podcast. Gewirtz noted that a wrestle like Dean Malenko, who was a talented wrestler and funny backstage, was never able to show his personality on camera, and that prevented him from being a bigger star. He said WWE Hall of Famer Ted DiBiase was the opposite way comparing him to Eeyore from Winnie The Pooh backstage.

“It’s almost like the opposite of what I was talking about before with Dean. Ted DiBiase for instance, we used to call ‘Red Light Ted’ backstage because backstage when you met him, he was on the creative team for a little bit, he was miserable on it,” Gewirtz recalled. “And he’d be the first one to tell you. Backstage he was kind of Eeyore where it’s like, ‘Well, I guess we’re going to go to the meeting now. I wonder what’s gonna happen,’ and then that red light comes on. And it’s like, ‘Haha. Everybody’s got a price!’ And he’s The Million Dollar Man all of a sudden. It’s unbelievable.”

Gewirtz then talked about Dwayne “The Rock” Johnson’s commitment in his backstage interviews. He notes that it’s something that he takes in everything he does, but he said it is important for talent to not be afraid and be confident in front of the camera.

“Some people, you can see it when the cameras on. Obviously, with The Rock, I’ve never experienced anything like that in terms of his backstage interviews,” Gewirtz admitted. “If it were me, I would be trying to usher everyone out of there so it could be that no one could watch me, and I’d be completely going half-speed because [I’d be] afraid essentially to commit 100%.

As an example of talking to someone backstage and helping them show their personality on TV more, he used WWE Hall of Famer Kurt Angle as an example. He noted that Angle is not a flashy person backstage, but he is a funny person once you get to know him, and he talked about working with Angle to show that side of him on TV.

“Kurt Angle is not a flashy, showy type of guy,” Gewirtz stated. “He’s a very humble, obviously, intense machine like competitor, but once we started brainstorming together, and we essentially entered WWE at the same time. His first pay-per-view is my first pay-per-view, and once you start talking and you saw that he’s actually extremely funny. Nobody would know this necessarily.

“Even his introductory vignettes, they were very funny but in a very subtle way where you weren’t exactly sure if he was in on the joke or not. He’s 100% in on the joke, and you get that by talking to them and then being able to hopefully write something, or write a scenario or get Vince [McMahon] to approve something that lets them show it.”