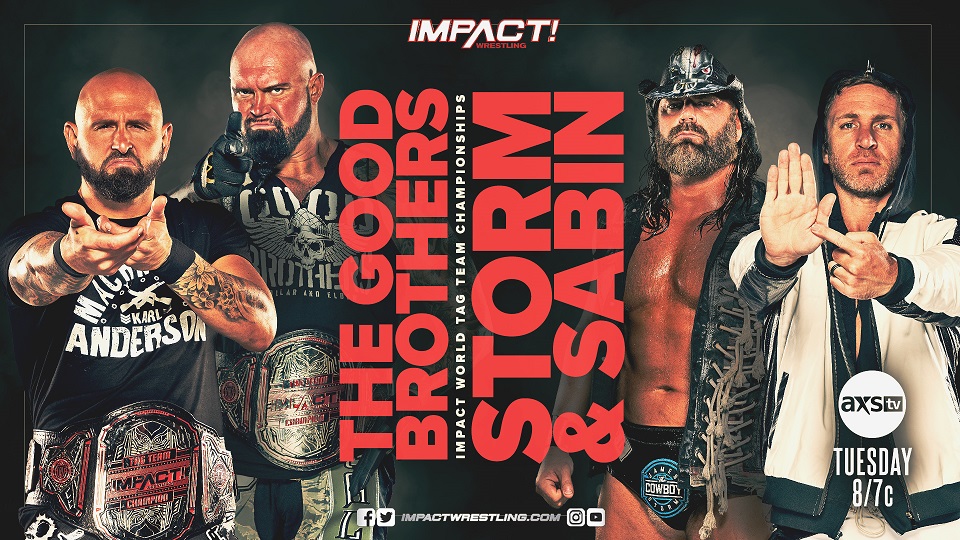 Just four days before their big title match at No Surrender, The Good Brothers (Doc Gallows and Karl Anderson) will have to defend their Impact World Tag Team Championship against Chris Sabin and James Storm tonight on Impact Wrestling.

This match came to be after The Good Brothers attacked Sabin and Storm after their unsuccessful match against Private Party to become the new No. 1 Contenders for No Surrender last month. If The Good Brothers retain, they will see AEW’s Private Party ( Isiah Kassidy and ‎Marq Quen) this Saturday. But if they come out titleless, Sabin and Storm will meet the young up and coming tag team this weekend.

Also set for tonight, the Impact World Champion Rich Swann will meet Tommy Dreamer for a contract signing ahead of their main event match at No Surrender. Swann threw down the gauntlet two weeks ago when he asked Dreamer to be his opponent. This weekend could be a historic moment for the “Innovator of Violent” both professionally and personally. If Dreamer walks out the victor, he’ll not only have a golden present wrapped around his waist for his 50th birthday, but he could possibly commemorate a new World Championship era in Impact Wrestling.

Be sure to join us tonight during our live coverage of Impact Wrestling at 8 PM EST!