Maria Kanellis On If She’s Interested In Wrestling Again 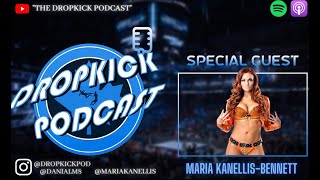 As a 17-year veteran of the professional wrestling industry, Maria Kanellis has found herself working in numerous promotions.

Speaking to the DropKick Podcast, the First Lady discussed her career starting with the Divas Search and working with Paul Heyman in OVW.

“Paul gave me an opportunity to grow, which is incredible and that’s why he has such a great mind for industry,” Maria said. “He’s willing to listen to what the talent wants to create, so being able to do that was incredible.

Since departing WWE this time last year, Maria has returned to professional wrestling in a behind the scenes capacity for Ring of Honor. Speaking on the chance of working inside the squared circle once again, Maria said it’s all about the right opportunity.

“I don’t know. I’m open to anything, but wrestling wise it’s not at the forefront of my mind,” Maria said. “For Mike that’s everything to him. That’s all he cares about is wrestling and being a really good professional wrestler. For me, if the opportunity were to come about, like how it came about in Impact, I would love that.”

You can listen to the full interview below: