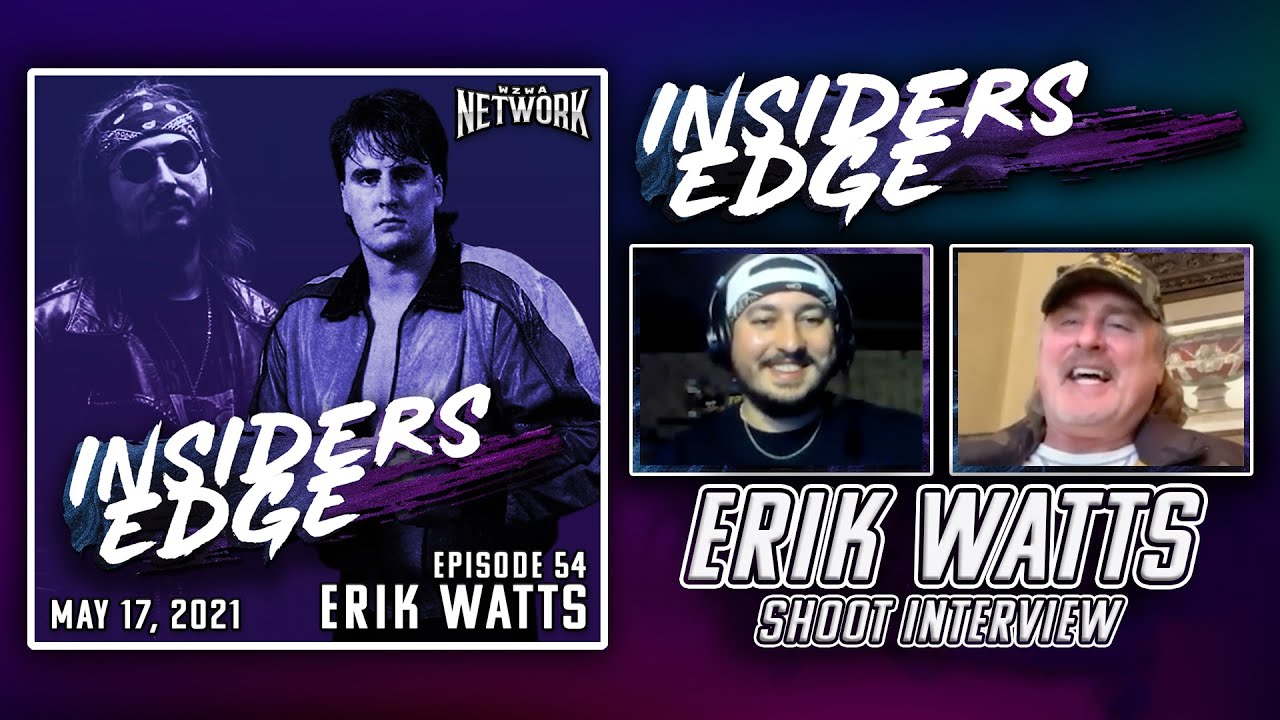 Former WCW and WWE wrestler Erik Watts sat down with Insiders Edge podcast to talk about his wrestling career. One story he recounted was an encounter with Hall of Famer Rick Rude while both were in WCW, leading to a real life wrestling match in the back.

“It was Stone Mountain, Georgia,” Watts recalled. “That was back when they were taped shows. And literally, we taped three shows that night and me and Rude were the 12th match, 25th match, the 39th match. So I had a 10, a 12, and a 20 minute match. It was crazy. So there was so much heat and so much hate at the time. Everything came together at the same time. You might of heard of the story and the time at which I had finally had broke and I was given the go-ahead that I didn’t have to be a rookie anymore. I was going to have to take s--t anymore and it happened in the dressing room and it happened with Rick Rude.

“He was talking about Curt Hennig. I didn’t know Curt Hennig, I knew of Curt Hennig. Curt Hennig was a great amateur wrestler. Rick Rude was a great boxer. So here he’s talking about Hennig and was like, ‘yeah, me and Hennig are so competitive. You know we’ll box, we’ll do this. I’m just the better athlete because when we wrestle, we’ve got this thing when he can’t turn me.’ And I don’t know. It was the end of a 10 day tour. I was depleted and I don’t even know why I said it and I was walking by and I said, ‘Hey, Hennig must suck as a wrestler then.'”

It was that statement, as Watts remembered it, that set Rude off. Watts admits in the moment he couldn’t believe he said it, but he ultimately stood his ground thanks to the advice of another future Hall of Famer in the locker room at the time.

“I’m walking through, I got my bags in my hand and I’m like, ‘What did you just… like are you that f–king stupid?'” Watts said. “”You got solar eclipse of the sun heat and you said that? That’s what you had to say?’ And I’m there and he flips out and goes, ‘You’re talking about my best friend!’ I’m in my head, ‘Hey Captain Insano, you’re dogging your friend. Your best friend, right?’ But I also was thinking, ‘God, if that got back to Mr. Perfect that I would ever question his amateur ability. From one amateur wrestler to another amateur wrestler, you don’t do that. That’s f–ked up, right?’ So now I’m thinking this, but I got a bigger problem. Everybody now wants the stuff to go down. So I’m sitting in my little locker and I remember there was construction at that place so the floor was a little dirty. You know, Rick’s got his nice outfit on. I got my s–t on and he just starts berating me. He’s standing over me, ‘who are you? You don’t know him. Curt Hennig. You piece of s–t.’ I mean he’s like cutting a promo of all promos on my ass.

Watts would indeed get his wish, as Rude then called Watts out on his supposed bad ass reputation. The two would then decide to settle it, not in a fight but in a shoot, amateur style wrestling match.

“And like the heavens opened up,” Watts recalled. “He goes, ‘well, you know, you’re supposedly some badass. I don’t know who made you the badass.’ So, I was thinking, ‘I want to dismantle him and whoop his ass’ and I don’t care about his ‘I’m so tough bulls–t’  because in my own way, I believe in myself and I had never had my ass whooped in a street fight so I’m like, ‘I got a pretty good record. I am willing to take this.’ I am in a no-lose situation. Mr. Gold Glove Boxer, Mr. Street Fighter. Everyone is going to expect me to but when I kick his ass… oh. So he said, ‘well, so you think you can turn me?’ And I go, ‘I think I can turn you.’ I said, ‘that little thing that you and Curt did when you got on your all fours like amateur wrestling and can I turn you to your back? Um, yeah, in a few seconds.’

“If you can imagine good guys, bad guys, referees. We might have had some of the people, some of the marks out there. The locker room was full. Sting goes, ‘I’ll give the go.’ I mean Sting was ready to go, right? But also Sting knew me since I was very young, so he knew. He had heard about the tournaments, he had heard about the wrestling. You know, I had been working out for the Olympic team. I had wrestled the University of Oklahoma. I had been wrestling with the Oklahoma State guys. I mean, my dad had me working out with collegiate wrestlers since I was freaking in eighth grade, seventh grade. So I’m going sitting there saying, ‘Okay.’

According to Watts, he quickly got the better of Rude, leading to Rude claiming that he cheated. A follow up contest then led to slamming Rude so hard on the concrete floor that the Ravishing One injured his shoulder.

“Rude did his thing,” Watts said. “(He) took off his jacket, he went on all fours and I got behind him and Sting goes, ‘Go.’ I’m saying he said go and I don’t know what a nanosecond is. Rick Rude was back on his head. And everyone goes, ‘Oooh.’ And Rick Steiner, you know, big guy, badass. Scott Steiner, badass. Now Scott didn’t like me because my dad. Rick didn’t have a problem with me so Scott’s like, ‘Argh.’ So we’re there and Rick goes, ‘let me out.’ I let him out and I jump up. I’m still thinking, ‘Okay, maybe he will get mad enough to make a move because I’m going to rip his head off.’ But now I’m sitting here kind of entertain and I’m like, ‘Okay, here we go.’ So he goes, ‘you cheated.’ I go, ‘Excuse me?’ Sting goes, ‘How does one cheat?’ He’s like, ‘That’s not how me and Hennig did it. Hennig did it to where I moved, there was no one calling go.’ And Sting was like, ‘That’s where in amateur wrestling they go.’ And he’s like, ‘That’s bulls–t. That’s not how we do it. I bet you can’t do it.’

“So he gets back down on all fours while I go and I get in Olympic position or freestyle position, which is when the person gets down on all fours, you can either go in a ride position in amateur wrestling or what you can do is put your hand into the diamond symbol and put it on their mid-back and you can stand. So I did that and he goes, ‘What the f–k are you doing? What kind of crazy s--t is that?’ I go, “Bro. In amateur wrestling, if you are doing freestyle or Greco, this is the other way of doing that.’ He goes, ‘Well that’s b------t.’ I go, ‘No it’s not. That’s just the way it is.’ He goes, ‘Well I will get out so fast it isn’t funny.’ And I go, ‘I’m sure you will.’ Well, what he didn’t know was, I was prepping him so that he would try to stand and so I went and I pushed on him and he pushed up, I just caught his hips. Everything and it was head and shoulder. From what he told me later on, I dislocated his shoulder and f–ked him up pretty bad. Slammed him. Now he’s hurt. Now, I didn’t know how hurt he was but it’s a concrete floor. And then I think he tried something else and he’s like, ‘F–k. That’s bulls–t.'”

At the time, Watts had major heat in the WCW locker room due to his father, Bill Watts, running WCW at the time. From that point forward though, Watts said things changed completely, even if Rude did try to get revenge on him later on.

“Like I was telling you, all the momentum was all against me in the locker room,” Watts said. “That was the single moment that the air left out of most of the heat for Erik Watts, because now you had all the people that hated me praying that Rick would whip my ass. Now they’re going, ‘well, we kind of heard this guy is a badass and he just took Rick Rude that’s known for fighting in the streets and he just dusted his ass’ in an amateur wrestling way, not a fight way, right?

“Well, Rude then came to me. And I remember, I was on the phone in the back of the auditorium and someone grabs me and I’m being lifted and it was Rick Rude. And I didn’t know I was on the phone. He goes, ‘What are you going to do now motherf–cker?’ I’m thinking to myself, ‘A. You didn’t grab my hand that’s on the phone. You got this hand.’ Dude, I just grapevine my leg, dropped the phone, switched out, lifted up that motherf–cker and pushed him into the concrete pylon. I said, ‘I do that. What’s your next move? He goes, ‘Let me down.’ I said okay and I just held him. ‘I’ll let you f–king down when I let you down.’ Put him down.”

Watts would go on to say that Rude would eventually admit defeat and put Watts over as a tough guy. From that point forward, according to Watts, Rude became a mentor to the still young talent.

“So, I didn’t know this but I get back on the phone,” Watts said. ‘I was talking to my wife and she goes, ‘What happened?’ ‘Oh, it’s Rick Rude. He came up behind me. He should have slammed me or punched me or something. I don’t know.’ Well that night, he walks out, a guy says something to him outside. He hits the guy, cracks his plate of his mouth in half and had charges against him and so I saw Rude a week later and he goes, ‘You know, what you did to me. My shoulder’s f–ked and it’s probably going to cost me a few thousand dollars in court.’ I go, ‘Bro, that wasn’t me brother, that was you.’ And he goes, ‘I know man. I got to be honest with you. I got a lot of respect for you. You’ve taken more s–t.” And I swear to god from that point on, I had one of the greatest mentors in my life.”