Naomi Believes Lana Is The Hardest Working Athlete In Their Division 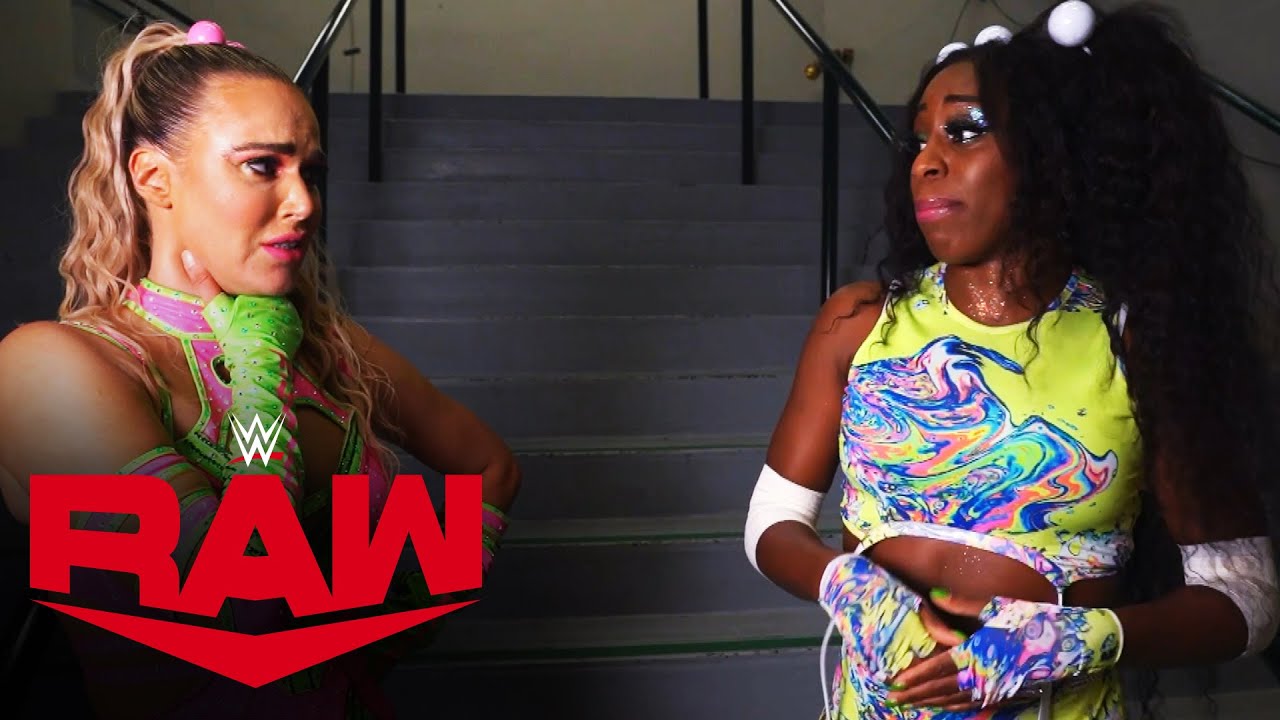 Just one month after seeing fans for the first time in over a year at WrestleMania 37, tag team partners Naomi and Lana felt the admiration from the crowd when they competed in the Women’s Tag Team Turmoil match. Although they did not advance that next night to challenge Nia Jax and Shayna Baszler for the Women’s Tag Team Titles, Naomi recalls what a breathtaking moment it was to see her fans in the stands again when she was on this week’s episode of WWE’s The Bump.

“Oh, my gosh, it was everything!” Naomi exclaimed on wrestling in front of fans again. “Like, I felt it when the fans weren’t there because I feed so much off of their reactions and that energy when my music hits. It’s definitely been a little different without having the fans. But gosh, it felt so good to have that back.”

With their ravishing glow being showcased each week on Monday Night RAW, Naomi mentioned to the panel how her and Lana’s partnership has been in the works for years – all the way back to their debuts in FCW.

“I think it shows. You can tell that it’s a natural connection. Even before [the main roster], Lana and I were in FCW. We just instantly clicked,” Naomi added. “We’ve always wanted to work with each other.”

Moments later, Lana joined the interview. She began by talking about the sacrifices she and Naomi have taken to hone their craft and prove why they’re deserving of the Women’s Tag Team Championships.

“We work our asses off. We train constantly,” Lana noted on their in-ring progress. “Just to give you a little idea, I have to take a red-eye [flight] to get to training at the Dungeon. She has to leave at 2 in the morning from Pensacola and take three flights. Then both of us have to drive an hour and a half. It’s like an 18 hour day to get to training at the Dungeon with Nattie.

“We go to the Performance Center. We go do extra training. We put our blood, sweat and tears…We spend hours away from our families because we want this. That’s what separates us from everyone else – we will go the extra hundred miles to achieve [our goals]. No one is going to stop us.”

Off that statement, Naomi then added how she finds Lana to be the most hardworking wrestler in the women’s division and how she hopes fans will get to see that once they’re able to fully return as part of a live audience.

“That’s another reason why I go hard for Lana, and I wanted her as my partner because I feel like there is no one in our division who works and is more driven than her,” Naomi praised. “Look, she’s legit. She doesn’t fly home. Instead, she stays in Tampa and trains and trains even to the point that I have to tell her she needs to take a break. This is how committed she is. I don’t think people get to see that side of her as much.”

Hours before their tag team matchup at WrestleMania 37, Lana received a moment with her fans – a moment she says brought tears to her eyes. Like Naomi, Lana hopes fans will have an opportunity to see how far she’s come in this sport.

“I was crying, literally,” Lana replied when seeing fans at WrestleMania 37. “I love the WWE Universe so much. They make the show. They give us the strength to push through when sometimes we barely have the strength to stand up.

“To go out there and hear them and see them, there were so many of their faces I actually recognized from seeing them at so many shows. They really became a part of us and our families. I was very thankful. I was like, ‘Man, they get to see the work I’m putting in.’ They get to see how passionate we are about what we do. We love to put smiles on people’s faces and entertain.”

As they concluded their interview, Naomi said it’s been inspiring to see Lana go from a valet to a full-time wrestler. Naomi looks forward to seeing Lana’s progress pay off in the weeks to come.

“It’s so special. I feel like it’s been a long time coming,” Naomi stated. “She’s been wanting to wrestle and be a fighter in this division for so long, and I’ve always encouraged her to do that. Now that she’s actually doing it here and she’s killing it and seeing her progress week by week, I’m going to stay with her until this pays off.”

You can watch Naomi and Lana’s full interview here. If you use any of the quotes in this article, please credit WWE’s The Bump with a h/t to Wrestling Inc. for the transcription.