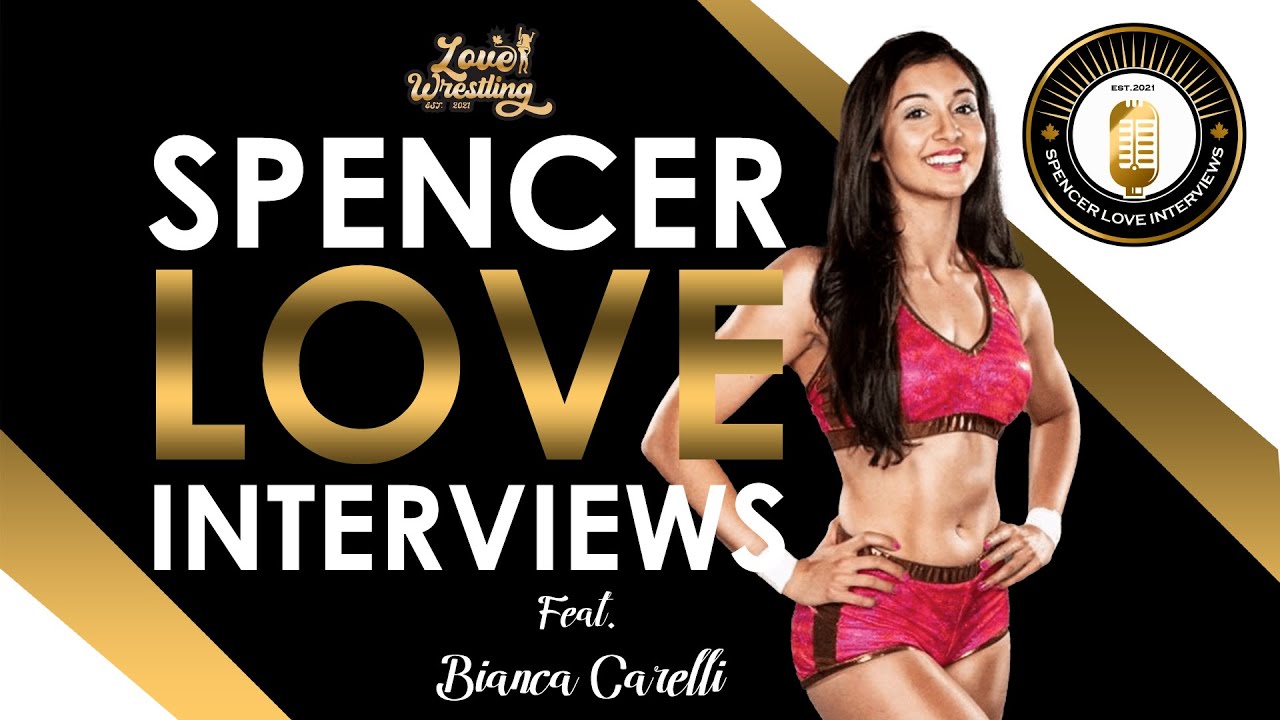 Bianca Carelli, the daughter of former WWE star Santino Marella, sat down with Spencer Love to talk about her budding wrestling career. In particular Carelli, who her father talked up on Twitter as a potential WWE star recently, talked about trying out for WWE in 2019 and her experiences from it.

“I remember saying that I didn’t feel like I did have enough time,” Carelli said. “I know my wrestling wasn’t, I think at that point I’d had 13 matches. So I obviously I was extremely green. But, at the same time, I was working out every single day, I was preparing for this. I was eating very clean. I’d been trying different diets for a year. My mind was 100% ‘let’s go, let’s do this.’ And I knew, okay, maybe I’m not gonna be the best wrestler. But you know what? I’m good on the mic and I’m willing to put in the work.  For me, I was kind of hoping they would see ‘oh, wow, she works really hard. She doesn’t give up.’

“I know a lot of the stuff that they do in tryouts is meant to wear you down to see mentally how strong you are. That was my biggest thing was I wanted to show my mental strength, I wanted to show my toughness, that you make me run until I throw up, and I will throw up, and I will keep on running. And then, I will throw up again and I will keep on running. You’re gonna have to call an ambulance before I stopped running. That was what I wanted to show is that that animal inside. But, on top of that, holy, just getting there! I’ll never forget this moment. Once we arrived and we got led into the room where the tryout was gonna take place. I was like, ‘wow, this so cool!’ I was just taken aback. It was breathtaking. I don’t know if it was meant to be a little intimidating, but it definitely was.”

Ultimately the intimidation factor paled in comparison to how cool it all was for Carelli. She revealed she’s hopeful to get another look from WWE sooner than later in order to show how much she’s grown as a wrestler since her first tryout.

“There was a big projector screen, and they showed us this video of all these clips about the PC and WWE,” Carelli revealed. “It was like, ‘wow, I want to be there. More than anything, I want to be there.’ It was cool, too, because a lot of the wrestlers that were there, you see them at shows, they’re cool, they’re tough, they kick butt. They’re athletes, and even they were all like ‘phew!’ Everyone was in the same mode. Everyone was nervous and wanting it, and wanting to show their best.

“Oh, man, I just want another opportunity to show how much I’ve grown. Because of COVID, maybe my wrestling experience, I haven’t been able to grow it as much as I was going to before COVID hit. I had so many bookings that just got thrown out the window because of COVID. I think I’ve had, well, I know I’ve had, because I keep track. I’ve had 32 matches now. So that’s three times the experience I think – math is not my strong point – of when I was at the tryout. Roughly three times.”

When she was younger, Carelli used to accompany her father while he trained at Ohio Valley Wrestling, then WWE’s developmental promotion. Love brought up how Beth Phoenix, Marella’s former partner, had mentioned Carelli cutting promos while visiting and Carelli confirmed that story was true.

“So first of all, Beth is a super sweetheart,” Carelli said. “She’s like the nicest ever. She was at OVW; a lot of people that have had careers or still have careers with WWE were at OVW when my dad was there. Of course, I’m little and all I know is that my dad’s in Kentucky, he’s wrestling, and he wants me to see what it’s like. So, there I go with my Hello Kitty backpack, my Nintendo DS, and I’m sitting in the stands. I just watched the wrestling classes, which were like Rip Rogers just like yelling at everyone. Totally awesome.”

“One day they’re doing promos. My Dad, like I can’t fully remember this, but I remember watching them do promos and I remember my dad saying ‘do you want to do one?’ I think they were practicing, the next day they were gonna tape. So I was like, ‘okay, sure!’ I always did like school plays and the speech contests and I liked talking in front of the class or answering questions. I was kind of like a nerd, teacher’s pet, nerd kind of girl. My pencils were always really sharp so they were ready to write with. Anyways, I came up with the promo and then I cut the promo.”

Carelli described her first promo as a heel promo of sorts. She received nice words of encouragement from some of the wrestlers afterwards.

“They actually, my dad posted a picture of it, I think we actually have the footage of it.” Carelli said. “I don’t really know where it is. But, I remember it was actually like a heel promo. I remember it! It was like, ‘everyone says the OVW Divas are the best. That they’re the most beautiful, and they’re the most talented,’ and then I think I said something like, ‘well, they must be blind!’ I was so little. Then, I remember saying something along the lines of like, ‘you know, you guys, you’re like cassette tapes,’ that’s how old back we’re going. I was like, ‘you guys are cassette tapes, I’m an iPod Nano,’ and that’s back when the iPod Nano was the thing!

“Yeah, I guess I got them. Burn! That was my big line, I guess ‘I’m an iPod Nano and blah, blah, blah.’ That’s all I really remember from it. But, I remember all the girls, especially Alicia Fox was like, ‘oh my god, that was awesome!’ I was just a little kid and I felt cool. I felt good about it.”

Carelli then talked about her father. A comedic character for most of his career, Marella was able to showcase his athletic ability at events such as Bloodsport in 2019, and Carelli says that while her father is a funny guy, his versatility probably went overlooked by the fans.

“My dad’s always been hilarious,” Carelli said. “He’s a funny guy. And so, for him to have a character that really shows off how funny he really is, I really appreciate that. That’s what makes him kind of different, maybe, than other wrestlers is that he’s great on the mic, he’s charismatic, he’s fun. As much as Santino’s goofy, it’s really similar to my actual dad, Anthony. Anthony and Santino are very similar. But, at the same time, my dad’s been an athlete his whole life. Wrestling, Judo football, he was on the Canadian national team. He’s gone across the world with judo. He’s an athlete, and he’s a fast learner.

“He trained under Rip, right, so he has great psychology. When he was at OVW, his character was actually a Russian guy, and his fight style was more like Sambo, badass, and he was great at that too. That’s one thing that’s really good about my dad is he’s versatile, and he’s naturally a talented athlete. I mean, I wouldn’t say that he didn’t, like, maybe his wrestling style was overlooked. Maybe by fans who have an untrained eye and can’t actually realize how fluid he is. How awesome he is. His arm drags, his hip tosses, everything. Even the way he takes moves is so well executed. He’s well trained, he’s a good athlete and I’m happy to learn from him. Not just as his daughter, but just in terms of the knowledge that he offers as a coach. It’s unbelievable knowledge.”