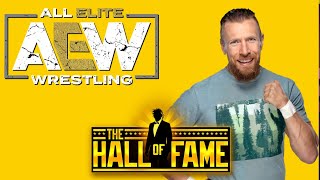 As previously reported, former WWE Champion Daniel Bryan has reportedly signed with AEW. Bryan has spent the last eleven years of his wrestling career with WWE. He had last appeared with the company in April of this year in a match with Roman Reigns for the Universal Championship on SmackDown. Bryan lost the match, and per the stipulation, he was banned from SmackDown as his contract with the company was set to expire.

Bryan is reportedly expected to debut for AEW on Dynamite on September 22nd for a special show called “Grand Slam” that will emanate from Arthur Ashe Stadium in Queens, New York. The show will be AEW’s first ever in New York.

WWE Hall of Famer Booker T spoke about the reports that Bryan is All Elite bound on The Hall of Fame Podcast, stating he isn’t surprised by the former WWE Superstar’s AEW arrival. The former 5x WCW Champion also mentioned that he’s not upset with Bryan for jumping to AEW and nor should anyone with WWE, stating he’s happy for the wrestling legend.

“I’m like Nate Diaz, I’m not surprised,” Booker said jokingly. “I’m going to leave the last part off, but I’m not surprised at all, man as far as guys making the switch and going over. It’s war man, it really is and these guys have every right to actually do it the way they want to do it and if they’re not happy over here.

“Daniel Bryan has had a great career in WWE, he was making money on the independent circuit, this guy was putting in the work. I’m not going to hate and the thing is WWE shouldn’t hate either. Basketball players go to different teams every year. We saw LeBron James leave Cleveland and say I’m going to South Beach. I understand, I get it, if I was one of those guys I might be thinking the same exact thing.”

In the report, it was also stated that Bryan asked for creative input in his character and the ability to work in Japan for NJPW. Booker commented on Bryan wanting some input in his character, saying that’s what a lot of wrestlers nowadays want in their career. He also talked about his wrestling company, Reality of Wrestling, and the reason he created it being so that he could have control over his own company.

“It’s not like it used to be back in the day where guys wanted to have a 20 year career in WWE,” Booker mentioned. “It was different back then, it’s a totally different time now with these young guys and the way they see this business. It’s their world and I can’t sit here and hate what Daniel Bryan is doing.