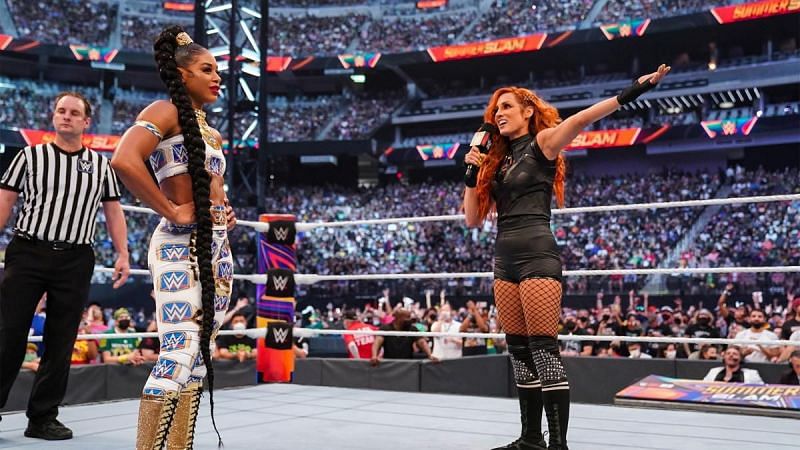 Bianca Belair’s 27-second loss at WWE SummerSlam to the returning Becky Lynch has sparked criticism across the wrestling world. After holding the SmackDown Women’s Champion for over four months, the EST of WWE’s reign came to a screeching halt when Lynch defeated her in under a minute.

WWE Hall of Famer Nikki Bella took issue with the match, saying it left her “frustrated” for Bianca. Nikki’s grievances were echoed by another Hall of Famer, who notes that an experienced voice like Nikki’s is missing in the boardroom.

“Nikki is talking from a… Let’s just speak from an executive perspective. She’s talking about what I was just talking about here earlier: you got to know how to protect your talent,” Booker T said on the Hall of Fame. “I could only think, I don’t know, but I don’t know if there’s anybody in that boardroom that are there in those meetings like a Nikki Bella, who’s able to actually speak up from experience about a situation like that and what it means for the ladies being out there in the middle of that ring and the fans that they’re catering to. I don’t think it’s anybody in there that can speak from that perspective. I don’t know. I could be wrong.

“Everything she said is 100 percent. The consensus around the wrestling world and the WWE universe, and for instance my wife, everyone is saying the exact same thing: I’m a Becky Lynch fan, but man I didn’t like it going down that way. Every fan is pretty much saying the exact same thing. For me, I’m not an insider. I don’t know what’s going on as far as why the matches turn out the way I do. I never know which way they’re going to go on it, or why they’re going the routes that they go. I’m just as in the dark and confused as everyone else.”

Booker took it a step further, as he believes Bianca’s quick defeat hurts the believability of the outcome.

“When you look at a match-up like that, you go, ‘Oh, Becky’s going to be fighting up hill on this deal right here.’ Then something like that happens and it takes you out of the point where your imagination is suspended there for a moment,” Booker said. “I always talk about suspending the imagination for the fans. They know what they pay for, but when they go to see a Broadway play, when they go see Shakespeare’s Romeo and Juliet, they still want to feel like they were actually in that moment. At the end of the night, they still want to say, ‘Bravo!’ If it was good enough, they’re going to say, ‘Encore! Encore!’ All of that is real. I’m just like all of the fans on this one. I’m going to have to sit and watch it play out.”

Whether Bianca came out on top or not, Booker believes the way she lost hurt her star power. In an era where main event talent is few and far between in WWE, Booker says the company should be focused on protecting those they’ve worked so hard to establish.

“When you got a company and you want to put your talent in the position to where everybody wins, because we’re dealing with a limited amount of stars and talent. We got to make it last and go as far as we possibly can,” Booker said. “When you miss a moment, just like we had with that match right there, you may never get it. Well they can’t get it back. It’s gone.”

If you use any quotes from this article, please credit the Hall of Fame with an h/t to Wrestling Inc. for the transcription.