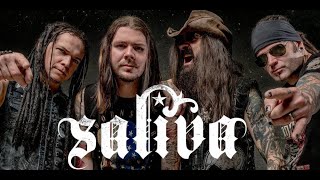 Bobby Amaru, the lead singer for the hard rock band Saliva, sat down with Reel Talker to talk the band’s connection with pro wrestling. Over the years Saliva has contributed heavily to WWE, most notably doing the theme music for Dave Batista. Amaru believes the cross promotion between the sides has only helped the band.

“I think that was a huge platform for them (WWE) as well, reaching a whole new audience,” Amaru said. “There are people who come to shows and say ‘I only know you guys because of wrestling.’ The wrestling thing we hear all the time. Wrestling is kind of like MTV in a way, people discovering your band. Wrestling helped out a lot of rock bands and artists in general. In the rock department there are a lot of bands that did a lot for wrestling and Saliva was one of the bigger acts that got lucky.”

Amaru also talked about the band re-recording Batista’s theme “I Walk Alone”, a few years ago at the request of WWE, along with another song. According to Amaru, the new version hasn’t been released yet.

While Saliva has always worked with WWE, Amaru revealed that the band isn’t opposed to working with rival promotion All Elite Wrestling. The promotion, like Amaru, is based out of Jacksonville, and they are willing to collaborate if AEW is interested.

“Me and Brad (Stewart) live in Jacksonville and they film all that stuff over there,” Amaru said. “Tony Khan and them, Jericho, those dudes are in Jacksonville every week. Never say never, we are open to collaborating and working with wrestling in all forms.”