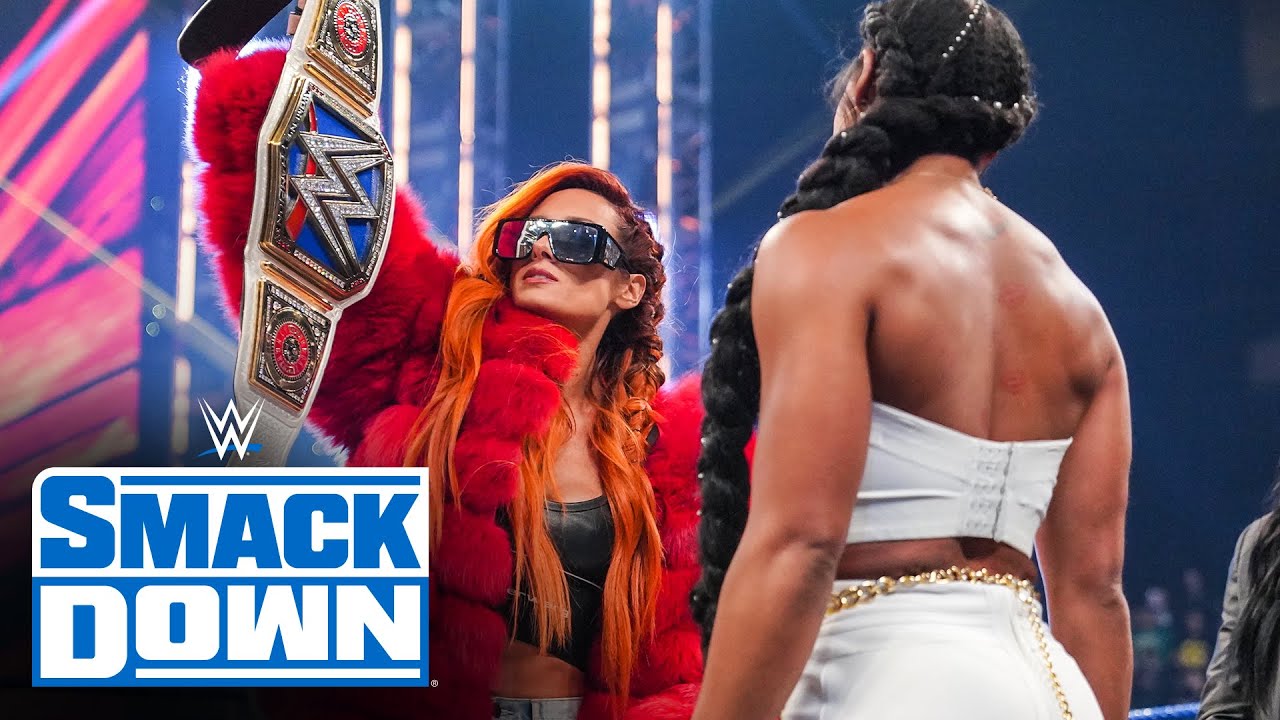 This week on WWE’s The Bump, the SmackDown Women’s Champion Becky Lynch spoke with the panel about her rise since coming back to WWE at SummerSlam last month. Before they got into her current rivalry with Bianca Belair, Lynch took a moment to share a heartfelt message with the new WWE Champion, Big E, who was also on the show.

“E is the best, man. E has talked me off many ledges when I couldn’t get my foot in WWE. E was always there to… well, one, make me laugh, and two, be so kind and patient. He’s got this calming energy,” Becky Lynch stated about how influential Big E’s presence is to her and others in WWE. “He just makes you feel better, and calm, and hopeful. I think this new era of E in WWE brings a lot of hope not only to the company or the business, but to the world.”

As they began journeying toward her feud with Belair, panelist Matt Camp wanted to know why Lynch kept rejecting Belair’s title proposals ahead of their contracted match set for Extreme Rules in two weeks. He was curious to know if she was trying to flex her power as champion or if she was, as Belair said numerous times, “ducking her.”

“Look, would you expect Conor McGregor to take a fight on an hour’s notice? No! He needs his training camp. He needs his fighting camp. I need my fight camp. I haven’t had my fight camp,” Becky Lynch explained on why she rejected Bianca Belair’s title proposals twice. “I call the shots. I say when I’m gonna have my match. When I fight, it’s a big event. I don’t want to throw that away willy-nilly. I need to give people time to tune in, not just drop it on them. But now, I have to wait until Extreme Rules, so I robbed the people last week. That was my fault? It was her fault. It was Sonya Deville’s fault. It was Adam Pearce’s fault. It wasn’t my fault.”

In an interview with New York Daily News, Lynch talked about her appearance at SummerSlam and her victory over Belair.

“I did what any intelligent person would do. And now, I’m suddenly the bad guy ’cause I came back better than ever.” Braxton wanted to know if Lynch looks at this criticism as confirmation of how successful she is.

“It’s enraging. What do people expect me to do?” Lynch comments on the spectator’s assumption that she’s now a heel. “I saw Bianca. I was watching everything. And she was talking about me and saying that her goal was to beat all of the Four Horsewomen. She was throwing out my name like it was a category on a list that she needed to take off; not like it was the name that it is. Not like ‘The Man’ was an institution. She was just throwing my name out willy-nilly.

“Do you think I’m going to come back and go, ‘Oh, ok, no problem?’ You know what? I’ve called it a cheap shot because maybe it was a cheap shot. But, you know, talking about it now, she deserved it. She deserves a punch in the face for having my name as a category on a list that she could just take off. You don’t just take off my name. I am a goal in itself!”

Going off that statement above, Lynch still can’t wrap her head around the mind games fans are pulling of wanting her back, then discarding her once she returned. Now that she’s back, it seems fans are displeased with the version of Lynch they’re getting now.

“See, this is the thing I don’t understand. I haven’t changed,” Lynch indicated. “I’m a little smarter. Maybe, I’m in better shape now. So, I don’t see what the hate is for? They were chanting, ‘We want Becky.’ So, I said, ‘Oh, they want me! That’s nice. Let me come back to them. Let me be their champion again because that’s what they want.’

Although Lynch acknowledges Belair as being a dominant force and trendsetter in the women’s division, Lynch doesn’t believe “The EST of WWE” is on par with the levels of achievement “The Man” has carried out.

“Bianca is an incredible athlete. There is no way around it. One of the most impressive women we’ve ever seen come through this,” Lynch began about Belair’s impressive run before her return. “But she doesn’t have the experience. She’s just unmatched when it comes to fighting somebody like me.”

You can watch Becky Lynch’s full interview here. If you use any of the quotes in this article, please credit WWE’s The Bump with a h/t to Wrestling Inc. for the transcription.

#SmackDown Women's Champion @BeckyLynchWWE has a message for all the critics!