AEW Senior Producer Jess Palombo posted an Instagram photo with Snooki and JWoww, while many fans noticed them sitting in the front row as well. They later sat in the upper deck, and were spotted on TV at one point.

The MTV stars were at Dynamite mainly to support JWoww’s fiance, Zack Clayton (Zack Carpinello). Clayton, who appeared on the MTV Jersey Shore Family Vacation series, is an indie wrestler who worked his first AEW match back on Dark in June 2020, losing to QT Marshall. Since then he has worked 7 more Dark and Elevation matches, coming up short in each one.

Clayton wrestled Marshall again at Wednesday’s Elevation tapings, his 9th bout for the company, which will air this coming Monday night. You can click here for full spoilers from the Elevation tapings. JWoww and Clayton have been dating since April 2019, and were engaged last February.

JWoww works with the Kulture City non-profit that AEW also works closely with. Kulture City is the nation’s leading non-profit on sensory accessibility and acceptance for those with invisible disabilities, and JWoww indicated she was at Dynamite to support them as well. She previously attended WWE RAW at Madison Square Garden in 2019, and thanked Kulture City for helping her son at the event as he’s diagnosed with autism.

Snooki and JWoww both have had ties to pro wrestling before now. JWoww appeared on TNA Impact back in October 2010, siding with The Beautiful People to confront Becky Bayless, who was playing a Snooki-inspired character named “Cookie” at the time. Snooki, who expressed interest in wrestling for WWE again in 2020, appeared on the March 14, 2011 RAW in a segment with John Morrison, Dolph Ziggler and Vickie Guerrero, which ended with her slapping Vickie. She later brawled with Layla and Michelle McCool. She returned to RAW two weeks later and introduced WWE Hall of Famer Trish Stratus to the crowd, which led to the six-person tag team match at WrestleMania 27. That match saw Snooki, Morrison and Stratus defeat Ziggler and LayCool with Vickie in their corner. She later won a 2011 Slammy Award for A-Lister of the Year, and appeared as a Guest Host that same year.

Stay tuned for more. Below are related photos of the MTV stars at Dynamite, along with a few shots of Clayton in action for AEW: 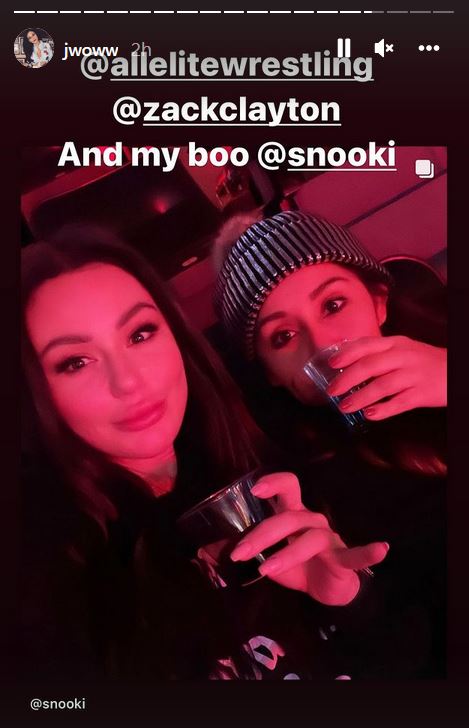 Previous
** SPOILERS ** AEW “Dark: Elevation” Tapings For Next Week
Next
Goldberg Open To More Matches After His WWE Contract Ends