The Fatal 4 Way for the WWE Title was changed to a Fatal 5 Way with Big E, Brock Lesnar, Bobby Lashley, Seth Rollins and Kevin Owens after WWE Universal Champion Roman Reigns tested positive for COVID-19, and his main event bout with Lesnar was nixed. Lesnar went on to win the WWE Title, pinning Big E for the win.

In an update, it was noted on Wrestling Observer Live how original plans had Big E retaining the WWE Title over Owens, Rollins and Lashley. The title change was a direct result of Reigns testing positive for COVID-19 and WWE pulling him from the show.

Regarding original plans for the WWE Title, the WWE On FOX Twitter account made a post-show tweet on Saturday and their graphic listed Big E as retaining over Lashley, Rollins and Owens. Lesnar’s face was put in the spot where Big E would’ve went, but someone forgot to change the text under the photo. You can see that now-deleted graphic below.

There’s no word on what WWE had planned for Big E after Day 1, or if he will get a rematch from Lesnar. We noted earlier that Lesnar likely will not be appearing on tonight’s RAW, and that Lashley vs. Lesnar is reportedly in the works.

Stay tuned for more on plans for Lesnar, Big E and the WWE Title chase. You can see the deleted WWE On FOX graphic below: 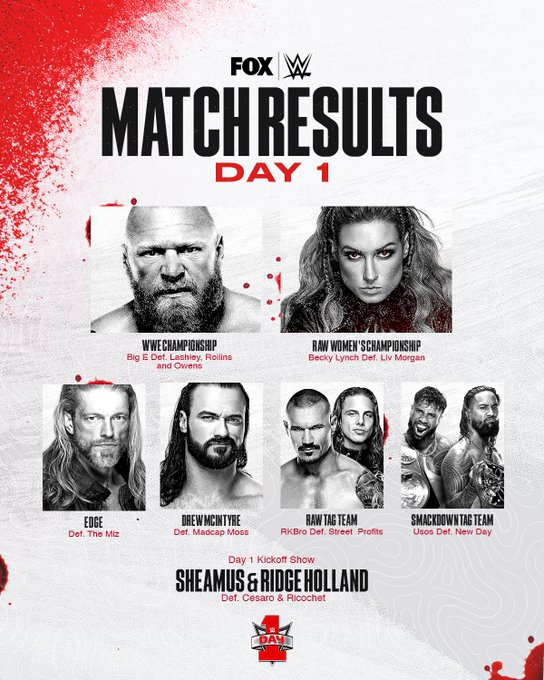 (H/T to Ringside News for the graphic)