WWE Hall of Famer Ric Flair took to Twitter today to lash out at RAW Women’s Champion Becky Lynch over her tweet with The Migos from WWE Day 1, but he has since deleted the post.

Lynch tweeted after Saturday’s WWE Day 1 pay-per-view and posted a backstage photo with Offset, Quavo and Takeoff following their special appearance. She captioned the photo with an apparent jab at Flair.

“Big Time Drip” appears to be a reference to the 2017 “Ric Flair Drip” single that Migos member Offset released with rapper/producer Metro Boomin. Flair appeared in that music video, and has made other appearances with The Migos.

Flair reacted to Lynch’s photo and said The Migos’ mood appears to be “night and day” compared to a music video screenshot he posted with Offset and Metro Boomin, which he attached to the tweet. Flair continued taunting Lynch in the tweet, and asked when she plans to “give up.”

“The Mood Is Night & Day! One’s Real & One’s Make Believe! She’s Big Time, But There’s No Drip, And There Never Will Be! And I Thought She Was THE MAN, But I Guess Not Because They Don’t Own It! HA! When Are You Going To Give Up @BeckyLynchWWE? You’re So Far Behind! WOOOOO!,” Flair wrote.

It should be noted that Flair’s photo is not with The Migos, just one of the members, Offset, and rapper/producer Metro Boomin.

Flair has since deleted the tweet, and Lynch has not responded as of this writing. There has been tension between Flair and Lynch for a while now, going back to issues over the trademark for “The Man” name. 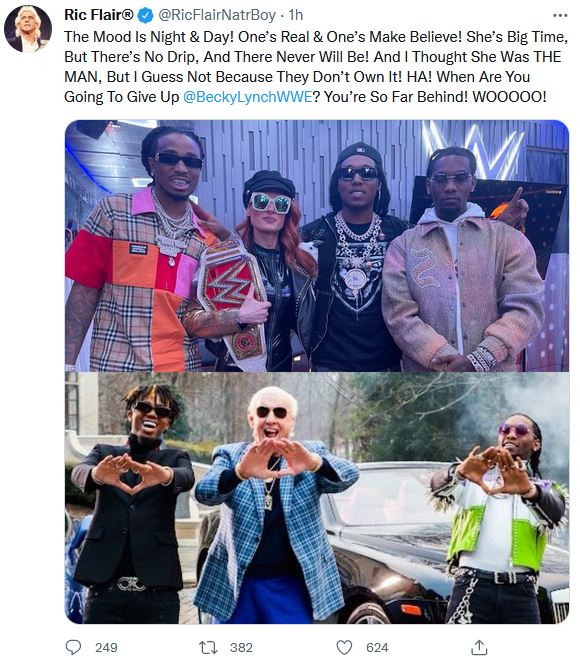