Cody Rhodes seemed to say a lot through a solitary tweet on Thursday night.

The American Nightmare raised a toast to his peers who “keep their chin up” through adversity and value the importance of fans, but also called out other wrestlers who shame fans and exhibit signs of a victim complex.

To wrestlers who don’t have a victim complex. The ones who hear/respect the audience cheer & boo, keep their chin up…realizing very few people can do what we do. The ones who put in the effort

The ones who don’t try to shame the fans realizing without them, we ain’t sh!t pic.twitter.com/xeSQqtceEo

As expected, Rhodes’ cryptic tweet got his followers talking as to whom it was directed towards. Some believe the post was a response to AEW star Eddie Kingston’s recent comments in defense of Adam Cole’s physique. Others believe Rhodes was generally addressing wrestlers who brush off fan criticism as hate.

Rhodes knows a thing or two about being booed despite portraying a babyface character. During his final few months in AEW, the former 3-time TNT Champion was routinely on the receiving end of negative reactions, which he addressed in several interviews. In fact, Rhodes admitted to seeking the advice of WWE icon John Cena, who dealt with polarizing reactions all through his career.

“He very eloquently told me to be honest with myself as to why a crowd would react that way,” Rhodes said of the advice Cena gave him recently. “Look in a mirror, and if you feel you’re doing the right thing, keep doing it.”

“If the crowd starts making any noise…you have to reward them,” Rhodes continued, referring to another piece of wisdom Cena once imparted to him. “You have to give them something, whether it’s just coming to your feet, or whether it’s just showing the intent, that fist, there has to be something.”

Rhodes is currently the odds-on favorite to make a triumphant return in the 2023 Men’s Royal Rumble Match. With WWE announcing that Rhodes will miss up to 9 months following surgery to repair a torn pec, the timeline for a Royal Rumble return is a realistic one. Rhodes, however, has a plan of his own, as seen below in his recent Instagram Stories post. 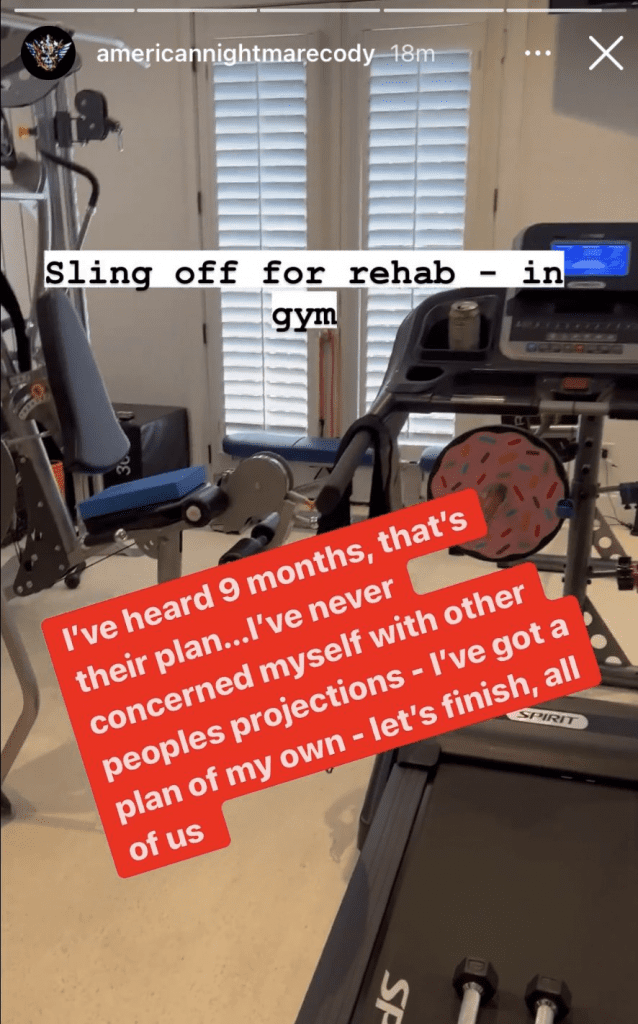 Since being sidelined, Rhodes has been out and about and spotted watching tape with his students at the Nightmare Factory in Atlanta. In a later tweet, Rhodes would explain why Bret Hart vs. Mr. Perfect at SummerSlam 1991 and Ric Flair vs. Sting at The Great American Bash 1990 have always been his two go-to matches in tape study.

Rhodes has remained undefeated since returning to WWE at WrestleMania 38. Dave Meltzer recently reported that WWE Chairman & CEO Vince McMahon made the call to have an injured Rhodes defeat Seth Rollins at Hell in a Cell, even though conventional wrestling protocol calls for the wrestler about to undergo surgery to lose in such situations. Suffice to say, McMahon is very high on Rhodes.