Two-time WWE Hall of Famer Kevin Nash, however, is evidently among the section of the wrestling world that appreciates the Bucks and their contribution to the business. While responding to Bagwell’s critique of the AEW EVPs, Nash said that his former WCW colleague would have “got” the Bucks had he worked against them.

You would if you worked against them. Super talented and can make everyone look good

Nash would also refer to the matches he & Eric Young had against the former Jeremy & Max Buck of Generation Me more than a decade ago. At three consecutive “TNA Live” events in June 2010, Nash & Young successfully defended their TNA World Tag Team Titles against the Bucks, but they never had any matches on television.

This isn’t the first instance of Nash praising Young Bucks. Last year, Nash told the brothers he always believed in their “intangibles” and knew they were destined for success. 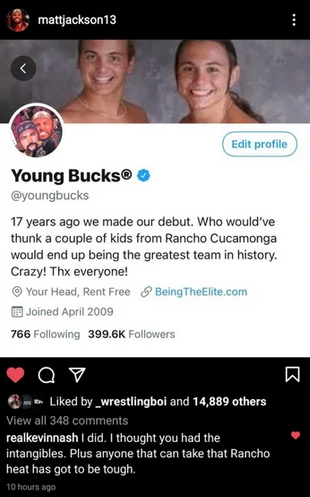 Over the years, Nash has also defended the Bucks for using nWo’s “Too Sweet” hand gesture as part of the Bullet Club. In the aftermath of WWE hitting Young Bucks with a cease and desist over the hand gesture in 2017, Nash and Sean Waltman contended that Bullet Club was actually keeping the nWo’s legacy alive by mimicking their mannerisms and taunts.

“If they want to call it too sweet, that’s fine,” Nash said on Waltman’s podcast [H/T Fightful]. “To me, it’s like, really? I’m sure somebody threw the peace sign up for the first time. What are you gonna get intellectual rights on that?

“It keeps us alive.”

Nash added, “If you’re a member of The Rolling Stones and Pearl Jam wants to cover Satisfaction, I don’t think I got a problem with it. It’d be one thing if the guys were jabrones. But these are the young, talented guys that are basically emulating the thing that you did.”