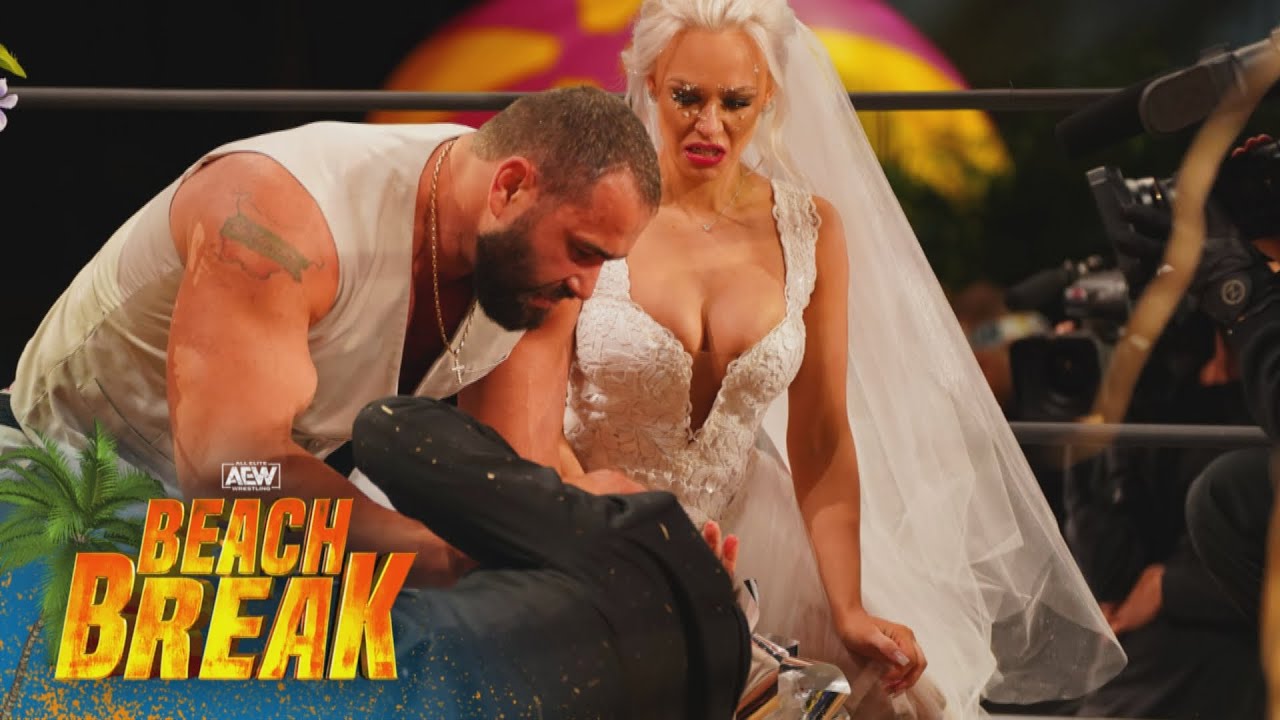 On last night’s AEW Dynamite: Beach Break, Penelope Ford and Kip Sabian were married by James Mitchell. The segment also featured Miro as the Best Man, “Charles” Taylor as the ring bearer, and Orange Cassidy as the surprise guest in the giant cake.

The ceremony went pretty smoothly until Miro’s toast where Taylor was able to shackle his foot to the ring post. Orange Cassidy then popped out of a giant cake that was in the ring to help Taylor drop Sabian. Ford didn’t go unscathed as she went face-first into the wedding cake during the brawl.

Backstage, Ford’s ex, Joey Janela, watched the wedding, which was capture in a photo by Jungle Boy. Ford and Sabian got engaged in real life last April.

Janela and Ford split up back in late 2018. Wrestling Inc. spoke to Janela last year about their off-and-on relationship.

“We’re just friends at the moment,” Janela said. “It is what it is. We dated on and off for four years. The last time we broke up, we broke up for about eight months and no one knew because we didn’t put it out there. That’s hard to do when people on social media are tagging you and saying you and your girlfriend are not together or seeing other people. We got back together and we split up again.”

We also asked him last year if it was uncomfortable at all working with his ex (and Sabian) in AEW, but Janela said he didn’t find anything in the wrestling business weird.

“Not really at all. I’ve been in the wrestling business for 15 years now so nothing’s really weird or uncomfortable,” Janela responded. “I’ve seen it all and heard it all. I’m trying to find my footing and they are as well. Who knows how all of this will turn out after this is all said and done.”

Thank you @boy_myth_legend for catching this beautiful moment… #AEWDynamite pic.twitter.com/g4YaCxsKEe