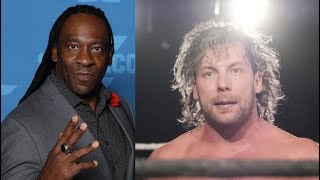 On the latest episode of The Hall of Fame Podcast, Booker T spoke about criticism he received for comments he made on a previous episode regarding Kenny Omega becoming IMPACT World Champion. Booker stated that IMPACT gained nothing by having Omega win their world title and said he doesn’t know “what the company is thinking right now.” While Rebellion was reportedly the most successful IMPACT pay-per-view in years, television ratings since the event have been some of the lowest of 2021.

After receiving criticism from people on the internet, Booker admitted that it had been tough to deal with the negativity, but he still doesn’t refute what he said. The two-time WWE Hall of Famer continued to disagree with IMPACT’s decision to let Omega hold their championship, and noted that it looks bad for Rich Swann too.

AEW superstar Chris Jericho also made comments recently regarding the AEW / IMPACT relationship, saying AEW is on completely different level than IMPACT. Booker said that he agrees with Jericho and doesn’t believe he signed up to wrestle in AEW to also wrestle for another company like IMPACT.

“For me personally, I don’t think Chris Jericho bought into AEW to go work for Impact. That’s a totally different contract. I have no time to even entertain something like that unless I was one of the executive producers, getting one of those kinds of checks. Am I wrong or is Chris Jericho wrong?”

Booker also spoke about why he doesn’t think the relationship between the two companies will last much longer. Being the host of a podcast, Booker continued to say he can be critical given his platform and has the right to say what he wants about the wrestling relationship.

“It just muddies the water more than anything,” Booker said. “I need you focused on my show, my stars, all the time, nobody else ever. That’s just my opinion.