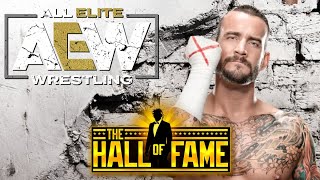 As previously reportedly, CM Punk has reportedly been in talks about returning to the wrestling ring and is expected to end up in AEW.

WWE Hall of Famer Booker T responded to the reports of Punk’s return on The Hall of Fame Podcast, wondering if Punk can still go at age 42. The 5x WCW Champion also mentioned how much the wrestling business has changed and believes that Punk will have a lot of catching up to do if the reports are true.

“Out of sight, out of mind,” Booker said. “CM Punk has been out of the game for a minute. I’m not hating or anything like that, but my thing is this. Even as great a physique as I have right now at 56, when I got into my 40s, mid-40s, even though I looked good, I had a phobia about taking my shirt off in the locker room with the young guys. I had a subconscious thing that I was working with there and thinking maybe my time has passed me by, maybe it’s time for me to start doing something else as well as man am I losing a step. I started questioning myself when I got to a certain age.

“That’s where I come from with the CM Punk thing, can he go out there and still do it? Yes, but has the game changed tremendously in the last 7 years? Yes, I think so.”

Booker T also spoke about how Punk has not officially been announced as signed by any promotion. He feels that Punk needs to go somewhere that wants him the most.

It was also reported that Daniel Bryan has signed with AEW and is expected to debut for the company in September as part of AEW’s first show in New York. With the news of both wrestlers reportedly heading to AEW, Booker discussed if he believes Bryan heading to AEW would impact Punk’s decision to join the company.

“Me personally, I don’t know,” Booker said. “I can’t say yes or no because I don’t know how good of friends those guys were. I know CM Punk, when he left the business he cut ties with pretty much everybody. I don’t know, I can tell you this. No one’s decision has ever influenced me to do anything in the business.

“I think Punk will gel with more people in AEW these days than he would in WWE. I think the roster in WWE is totally different other than a few guys like Roman [Reigns], Seth [Rollins]. But I don’t know how well he got along with those guys.

“Daniel Bryan on the other hand, Daniel Bryan is a worker. Daniel Bryan even with a broken neck was chomping at the bit to get back in the ring. He’s a guy that I’m sure more than anything wants to work as well as I’m sure New Japan would highly see someone like Daniel Bryan and say let’s get him in here right now and let him have a run. Options are open and that’s what’s so beautiful about the business. You don’t have to just work in one company and make money and make a living, especially guys like Daniel Bryan who’s already created his career, he’s there and he’s a made man.”